Why Our Patron Saints Bring Us Closer To God

I have a number of special patron saints who I often turn to for intercessory help.

Being a mother of nine children, I have certainly kept Saint Anthony busy, and he always comes through. Over the years my kids learned that the first thing I would say when they come to me to tell me they can't find something was, "Have you prayed to Saint Anthony?"

That's how Saint Anthony became one of the patron saints of our family. We have found lost wallets, keys, important documents, cell phones (even one that took a trip on the back of my car for miles—then was picked up by someone who saw it on the road—after which it traveled with this person, who didn't speak English, for another fifteen miles until it finally ended up in a Wal-Mart parking lot near uptown Charlotte, NC).

Another patron saint of mine is Saint Monica. As the mother of Saint Augustine, Monica worried and fretted and wept and cried out to God on behalf of her son. I have done all of those things for my children, as well.

It is said that when Saint Monica asked St. Ambrose for help with her stubborn son he told her, "Stop talking to Augustine about God and start talking to God about Augustine." That is the quote that made me an instant friend of Saint Monica. I could totally relate to her desire to share her faith with her son, while sometimes letting her zeal become an obstacle. In the end she had to surrender and leave it in God's hands. The Holy Spirit would move Saint Augustine in ways Saint Monica could not have on her own. When she turned to God, her prayers were used as a source of grace that the Lord mercifully chose to work through!

As a convert to Catholicism, it took me a little while to develop the habit of praying to the saints. I was even hesitant to ask Mary for help. Then I heard a presentation on her Seven Sorrows that helped me see how Mary, though conceived without sin, also bore in a different way the burden of sin with her Son. That is why she is an advocate for us. When Jesus said to John at the foot of the cross, "Behold your Mother," and to Mary, "Behold your son," He was giving her to all of us and placing us under her loving care.

From that point on, I began to see how other saints could also give us aid through intercessory prayer. Didn't I continually ask friends on earth to pray for this need or for that need? Then why was it so hard to imagine that those in heaven would want to do the same?

I slowly began to learn more about the saints and to ask for their prayers.

Why do we pray to the saints?

A patron saint is a holy man or woman who is venerated as a special intercessor before God. The theological background of the patronage of saints includes the dogmas of the Mystical Body of Christ and the Communion of Saints. The Catechism of the Catholic Church says, "We believe in the communion of all the faithful of Christ, those who are pilgrims on earth, the dead who are being purified, and the blessed in heaven, all together forming one Church; and we believe that in this communion, the merciful love of God and his saints is always [attentive] to our prayers" (paragraph 962).

It goes on to say:

All of us, however, in varying degrees and in different ways share in the same charity towards God and our neighbors, and we all sing the one hymn of glory to our God. All, indeed, who are of Christ and who have his Spirit form one Church and in Christ cleave together.

"So it is that the union of the wayfarers with the brethren who sleep in the peace of Christ is in no way interrupted, but on the contrary, according to the constant faith of the Church, this union is reinforced by an exchange of spiritual goods."

..."Being more closely united to Christ, those who dwell in heaven fix the whole Church more firmly in holiness. . . . They do not cease to intercede with the Father for us, as they proffer the merits which they acquired on earth through the one mediator between God and men, Christ Jesus . . . . So by their fraternal concern is our weakness greatly helped."
—CCC 954–956

How does this bring us closer to Christ?

Just a few days ago, my husband's key fob fell out of his pocket while we were sitting on a bench at a crowded outdoor market in Maine. By the time he discovered that it was missing, lots of time had passed. We looked everywhere and asked all the vendors in the nearby tents if anyone had turned it in. Our fifteen-year-old son was with us, and he asked if I had prayed to Saint Anthony. Of course! We needed to ask St. Anthony! The outdoor market was large, but we decided to split up and retrace my husband's steps. Just then I stopped to ask a hot dog vendor about the missing keys. One of the customers heard me, and said that someone had mentioned finding a key fob on the bench on the opposite side of the venue.

My quick and sure confidence in the help of Saint Anthony (and all the saints) reveals my faith in God. First, it is witness to my belief that God is always ready to help me in this earthly life. My belief in salvation and in heaven is revealed in my asking the saints for intercessory prayer.

By way of analogy, I like to think of this example: when someone tells me that they know one of my children and like or respect them, I am honored. Surely God is delighted when we ask His saints to intercede to Him for us!

The Litany of the Saints

The Litany of the Saints is a beautiful prayer with which to honor them:

Who are your patron saints?

Which saints do you turn to for special help? 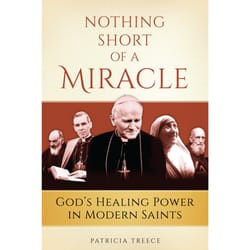 Nothing Short of A Miracle: God's Healing Power in Modern Saints
Recommended for you 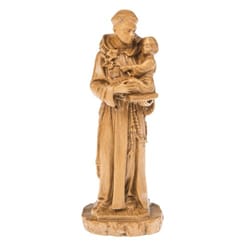