What Saint John Paul II Meant To My Catholic Faith

I became a Catholic in 1991. To say that my faith was affected by the man who was pope at the time of my conversion is an understatement.

At first I could not anticipate how this Holy Pontiff, who was the shepherd of approximately one billion Catholics, could make a difference in my life. Yet John Paul II became important to me in unexpected ways.

This great man of faith had a remarkable ability to penetrate souls—not simply by the words he spoke, but by the way his life expressed those words. Shortly after my conversion, I recall being attracted to the bold and enthusiastic faith of Pope John Paul II.  His genuine smile and his gentle face did not prevent him from delivering strong words about carrying our crosses or not giving up on God through the difficult moments of life.

The way Jesus shows you is not easy. Rather it is like a path winding up a mountain. Do not lose heart! The steeper the road, the faster it rises toward ever wider horizons.
—Pope St. John Paul II, World Youth Day 1996

Since he was often seen hiking in the Alps, reading beside a mountain stream, or offering Mass while weathering the elements with a group of young people, it wasn't hard to picture the Pope actually "winding up the mountain" that he spoke of.

I shared a love of the outdoors with the Pope. The truth is, as I grew in my own faith, I would have followed this pope up whatever mountain he led me.

The Pope's Love of Sports

Pope St. John Paul II was very athletic. He was known to ski and to swim, even building a swimming pool at the Vatican (as an option for exercise) a few years after becoming pope. He was called upon to speak to athletes all over the world, and often compared the rigor of sports and competition to the discipline of the spiritual life:

Sports are not merely the exercise of muscles, but the school of moral values and of training in courage, in perseverance, and in overcoming laziness and carelessness.
—Pope St. John Paul II's address to the European Olympic Athletes in 1984

When he addressed the delegates of the Italian Mountain Climbing Club, he spoke of these things in a profound way:

I exhort you in the words of my predecessor, Pius XII, to be “docile to the lessons of the mountain:…it is a lesson in spiritual elevation, of an energy which is more moral than physical” (Discorsi e Radiomessaggi, X pg. 219). I congratulate you on your programs which aim at educating your members in respect for nature and in a deepened examination of the message which she imparts to the human spirit. Have special concern for the young, to train them to follow the type of life that the mountains demand of their devotees. It requires rigorous virtues in those who practice it: strict discipline and self-control, prudence, a spirit of sacrifice and dedication, care and solidarity for others. Thus we can say that mountain-climbing develops character. In fact, it would not be possible to face disinterestedly the difficulties of life on the mountains if the physical and muscular strength, which is very necessary, were not sustained by a strong will and an intelligent passion for beauty.

Help our members also to be contemplatives, to enjoy ever more deeply in their mind the message of creation. In contact with the beauties of the mountains, in the face of the spectacular grandeur of the peaks, the fields of snow and the immense landscapes, man enters into himself and discovers that the beauty of the universe shines not only in the framework of the exterior heavens, but also that of the soul that allows itself to be enlightened, and seeks to give meaning to life. From the things that it contemplates, in fact, the spirit is lifting up to God on the breath of prayer and gratitude toward the Creator.

To all of you, to the members of  your club, and to all who practice the sport of mountain- climbing, I gladly impart my Blessing.

The Lessons of the Mountains

The "lessons of the mountains" are the lessons of everyday life. Life is difficult. We all bear crosses. Yet we are called to live in union with Christ who suffered before us, and who gives us the grace to carry our crosses well. 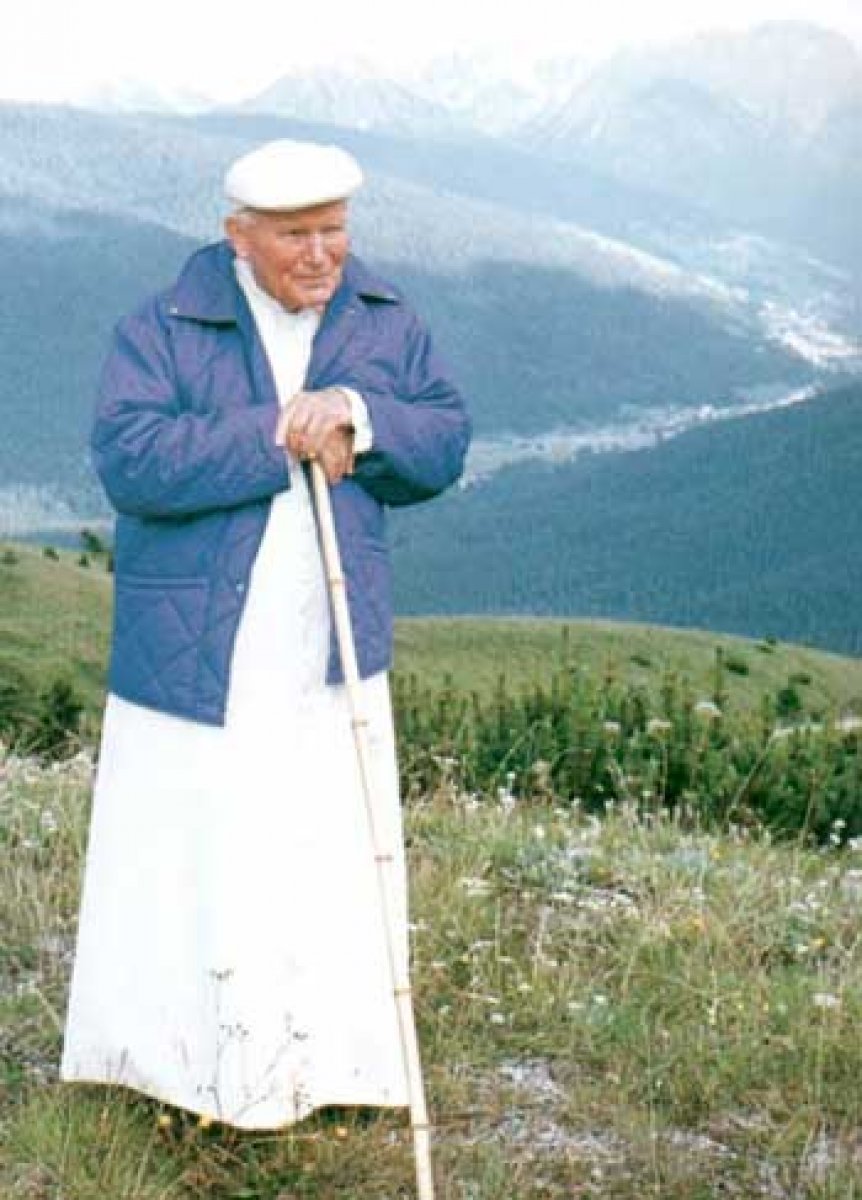 This was the message that so many of us received from Pope John Paul II, who rallied us all to a life of conversion.

Do not be afraid!  Life with Christ is a wonderful adventure. He alone can give full meaning to life, He alone is the center of history. Live by Him!
—Pope St. John Paul II, at a Mass with the youth, Czech Republic, 1997

Perhaps it was staying active that kept the Pope young at heart. But even as he aged and could no longer participate in some of the activities he loved, he showed the world what it meant to grow old with dignity, and how to suffer well.

The Bishop of Rome as a Spiritual Guide

Yes, our beloved Polish people taught me, a new Catholic, so much about the teachings of the Church and how to deepen my life of prayer. My affection for him grew as my faith blossomed. Shortly after I became Catholic, my husband and I joined a group of young couples from our parish who were reading through the Theology of the Body.  We met monthly with Father Matthew Kauth (who had a great love for the Pope) to discuss the book, which is actually a compilation of John Paul II's Wednesday audiences from 1979–1983.

In Witness to Hope, a biography of John Paul II, author George Weigel explained that John Paul II's use of the general audience to share the Theology of the Body made these audiences a platform for catechesis. In this way, the Pope helped to "renovate" the ancient tradition of the Bishop of Rome as a teacher of theology and a spiritual guide:

Others such as Ambrose (bishop of Milan), Augustine (bishop of Hippo), and John Chrysostom (bishop of Constantinople) often used their preaching before large audiences to work out major parts of theology and to share that knowledge with others.
—George Weigel in Witness to Hope

Even though the book was, at times, seemingly beyond the scope of my intellect, the words of Pope John Paul II challenged me to contemplate the true dignity of the human person. With each chapter,  I learned to appreciate what it truly meant to be made in the image and likeness of God, and I began to see my role as a woman, wife, and mother in a whole new light. He not only broadened my view of my vocation; he even enlarged my faith. 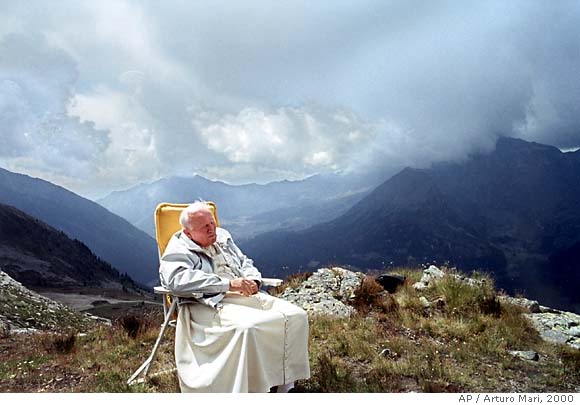 Most Catholics recognize the phrase "Be not afraid!" It became a motto for the papacy of John Paul II. This bold statement was important for people of all ages and vocations. Much of what we saw in him was reflected in those words. Whether it was his influence in the battle against Communism, his visits to over 100 countries, his prolific writings in the form of books, encyclicals and letters (including the first Letter to Women), his devotion to the youth, or his forgiveness and compassion toward the man who shot him—John Paul II exhibited what it meant to trust in God and to not be afraid.

Alongside this motto rang another theme of his:  the "universal call to holiness." This message emphasizes that all Catholics, no matter what their state in life, are called to live a life of sanctity. Weigel explained how the Pope laid out a dramatic, even radical, vision of the laity living out its mission to society "as an expression of its full membership in the Body of Christ."

John Paul's approach to the laity is reminiscent of John Henry Newman. The great nineteenth-century English theologian, asked by his bishop what the clergy should think of the laity, is said to have responded that "we would look rather silly without them."
—George Weigel in Witness To Hope

The Pope's respect for all who make up the body of Christ was reflected in much of what he said throughout his pontificate.  Addressing women in particular, and their various vocations or states in life, he said "Be who you are!" This simple statement is far more profound when we realize that the Pope was speaking about the very essence of who God made each of us to be.

This was the message of Pope John Paul II to all families, as well. "Be who you are" says so much when we recognize the unique role God gave to each of us as members of the body of Christ, not only in the "domestic church" of our homes, but in the broader Church, as well.

Many who knew Pope John Paul II personally said that he was a man who spent as much time "interiorly" in prayer and solitude with God as he did "exteriorly" at work as the vicar of Christ. This contributed to the  authentic Christian spirit that so many  saw in him.

John Paul II’s accomplishments, in the Church and the world, have to be understood as the fruit of his prayer, even more than the fruit of his thought or action, because the thinking and the doing were energized and informed by the praying — by his daily conversation with the Lord. As for his friendships, his intense interest in others’ personal and spiritual journeys gave him a rich insight into the human condition that served him very well as both an intellectual and a pastor.
—George Weigel in Witness To Hope

As a convert to Catholicism, I owe much to Saint Pope John Paul II, whose confidence in God and enthusiasm for life was a beacon for me whenever I struggled in my own faith. I looked to him for guidance and for hope. He was more than a mentor to me, more than a leader of the faithful, more than a teacher of truth; he was like a father figure, always pointing me towards Christ.

I will forever be grateful to the man who was pope when I became a Catholic. 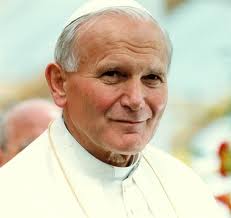 It is Jesus that you seek when you dream of happiness; He is waiting for you when nothing else you find satisfies you; He is the beauty to which you are so attracted; it is He who provoked you with that thirst for fullness that will not let you settle for compromise; it is He who urges you to shed the masks of a false life; it is He who reads in your heart your most genuine choices, the choices that others try to stifle.

It is Jesus who stirs in you the desire to do something great with your lives, the will to follow an ideal, the refusal to allow yourselves to be ground down by mediocrity, the courage to commit yourselves humbly and patiently to improving yourselves and society, making the world more human and more fraternal.
—Pope John Paul II 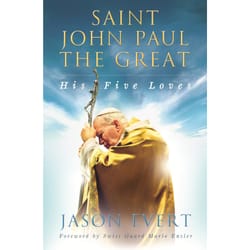 Saint John Paul the Great: His Five Loves
Recommended for you 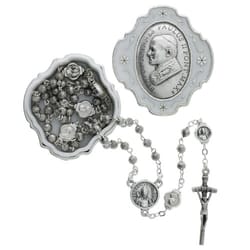 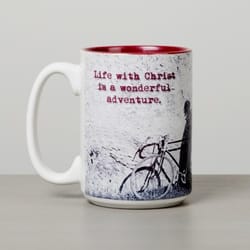