The White Cord Of St. Joseph: What You Should Know About This Unique Devotional

More and more people are coming to know and love the Sleeping St. Joseph devotion, and still more know about the popular St. Joseph Home Sale Kit tradition when they need to sell a house.

But have you heard of St. Joseph’s cord?

The Miraculous History of the Cord

This beautiful devotion began almost 400 years ago in the small town of Antwerp, Belgium. An Augustinian nun named Sr. Elizabeth was suffering from a mysterious and painful illness; doctors admitted that it would most likely lead to her death. Having a special devotion to St. Joseph, she asked that a cord be blessed in his honor. She wrapped this cord around her waist. A few days later, her pain disappeared while she was praying for St. Joseph’s intercession. Multiple doctors—including a Protestant doctor—accessed her case and proclaimed her cure to be miraculous.

Almost 200 years later, the miracle was publicized—particularly in Verona, Italy—and in March of 1842, this devotional cord was adopted by a hospital in Verona and distributed to its patients. On September 19, 1859, the devotion of St. Joseph’s cord was officially adopted; a blessing formula created; indulgences added by Pope Pius IX; and widespread private use permitted. 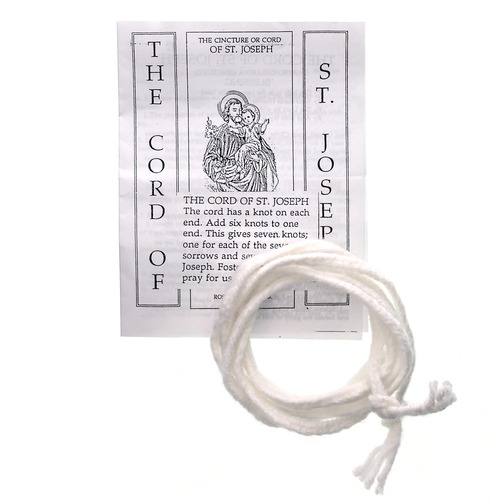 The White Cord of St Joseph is piously used not only as a remedy against physical ailments, but as a support in living the virtues of chastity and purity of heart.

Graces Associated with the Cord

There are five primary graces attached to the wearing of the cord and the pious recitation of the corresponding prayers:

The following is recommended for this devotional:

The Cord of St. Joseph should be of thread or cotton, ending at one extremity in seven knots, indicative of the Seven Joys and Sorrows of St. Joseph. It is worn as a girdle for purity or chastity and humility, and around the shoulders for obedience. It ought to be blessed by a priest with the faculties for this blessing. Pius IX approved a special formula for the blessing of the cord of St. Joseph.

The daily commitments associated with the devotion are to pray seven Glory Be's along with a prayer to St. Joseph for Purity:

into whose faithful keeping were entrusted

Christ Jesus, Innocence Itself, and Mary, Virgin of virgins,

I pray and beseech thee by these dear pledges, Jesus and Mary, that,

being preserved from all uncleanness,

I may with spotless mind, pure heart and chaste body,

ever serve Jesus and Mary most chastely all the days of my life.

We are also encouraged to meditate on St. Joseph’s Seven Joys and Sorrows, praying an Our Father, Hail Mary, and Glory Be after each Joy and Sorrow.

Read more: Hidden Treasures in the Life of St. Joseph: Meditating on His 7 Sorrows and Joys

Here are a few short, beautiful petitions found in the pamphlet that traditionally accompanies the cord:

St. Joseph, model of those who love the Sacred Heart of Jesus, pray for us.

St. Joseph, foster father of our Lord, Jesus Christ, and the spouse of Mary, pray for us.

Grant O holy Joseph, that, ever under your protection, we may pass our lives without sin. Amen. 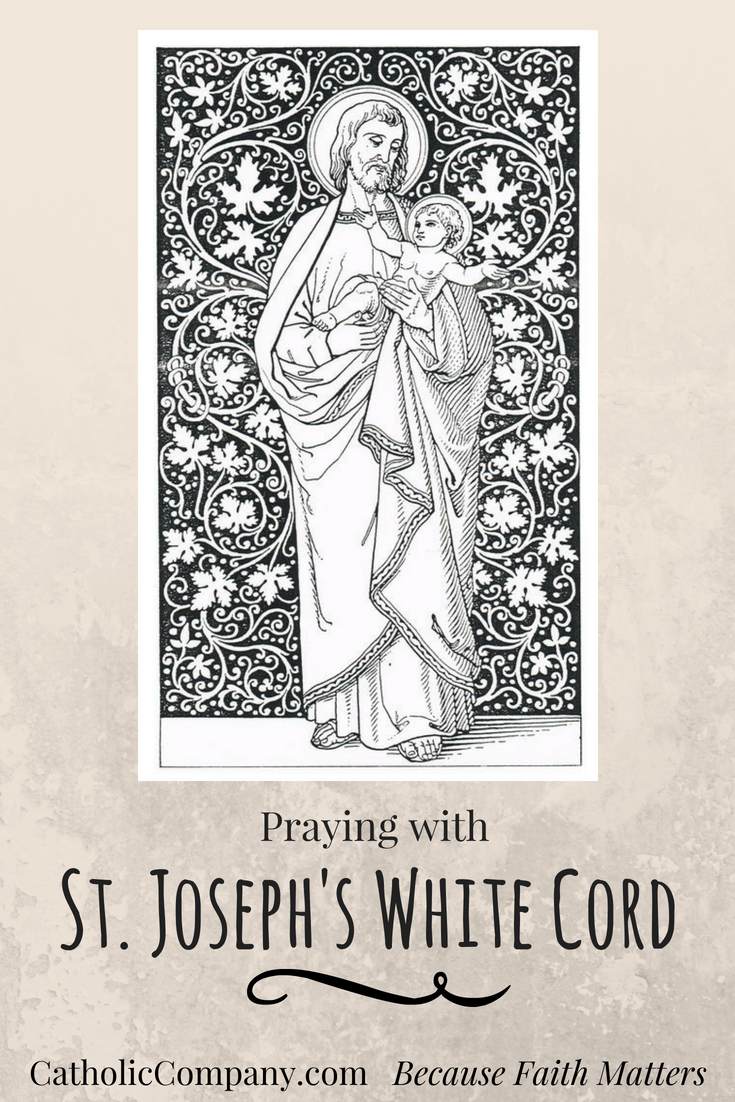 Genevieve Cunningham says
Aug 13 2020 1:11PM
Hi, Bettye! No, the items in The Catholic Company store are not blessed. It is not permissible to sell blessed items. We recommend that, once you purchase a item, you take it to your parish priest to have it blessed.

Mike says
Sep 26 2019 3:27AM
Do you happen to know or know where to find the special formula that Pius IX approved?

Ashley Osmera says
Sep 30 2019 9:46AM
I believe the formula is simply the particular prayers and devotions listed, as well as the specifics of the cord.

Bonnie says
Mar 7 2019 2:06PM
Thank you and blessings to you and all. Prayers for my family for my daughter was taken home to her glorious Heavenly Father on March 11, 2011. I need special guidance for my granddaughter which was her only beautiful daughter she will ever have and gave her life for her to be born, Amem.

Trisha says
Feb 2 2019 2:43PM
I pray to st Joseph and the holy family and am praying to st Martha novena and promised I let her novena be none and the infant Jesus in thank given for my pray here'd thank you our lady and our Lord for all my graces and all my help my family's help in life Trisha xxxx

Steven Buhagiar says
Sep 3 2018 12:59AM
I am also asking about how to wear it. Is it worn around the waist AND over the shoulders? I refer to the note in the article about "over the shoulders for obedience". Thanks in advance for your advice. God bless

Ashley Osmera says
Sep 4 2018 11:22AM
Stephen - While the article does briefly mention this, I believe the more common/prominent tradition is to wear the cord around the waist. Though perhaps some might wear it over the shoulders in a similar way to how you would wear a scapular.

Jacqui Haffner says
Jul 5 2018 6:39PM
I apparently am one of those persons who needs visual instruction. Is the cord worn outside clothing? How does one wear it around the shoulders, as a stole?

Ashley Osmera says
Jul 6 2018 10:23AM
Hello Jacqui!
Seven knots are tied in the cord, and then the cord is tied around the waist, underneath clothing.

Tricia Nagaki says
Jun 28 2018 1:17AM
Can you do this for the intercession for another person?

Ashley Osmera says
Jun 29 2018 2:05PM
Hello Tricia - Good question. As far as I know, the main use of the cord is for yourself. However, if you pray for yourself and then also add the intention of praying for a particular person's healing or chastity, etc, that is certainly admirable! If this person is open to it, you could also invite him or her to join you in the devotion and wearing of the cord.
Here is another beautiful intercessory devotional you may also benefit from: https://www.catholiccompany.com/getfed/green-scapular-devotion/. God Bless!