Sometimes we just don't appreciate certain stories until we are old enough.

I am quite sure that my mom had told me how she ran into Mother Teresa once, but apparently this story had little effect on me at the time and didn't seem as wonderful as it really is.

Back in 1995, my mom was a young mother with five children. (There are nine of us now.) It was a time of life that was truly testing her limits. She was stretched thin as a wife and mother, trying to raise us. My dad, who worked very long hours as he lovingly spent himself to support us, came home late in the evening and often had to miss dinner.

Money was tight for them, so while all her "mom friends" were able to participate in certain events and activities, my mom was never able to join them.

A few weeks ago I was chatting with my mom on the phone, and something I said prompted her to share her Mother Teresa story with me again:

"In 1995, we were flat broke, had one car (Dad’s), and I was overwhelmed (as usual) by our finances, homeschooling, and trying to be a faithful Catholic wife and mother. All the usual young mom stuff.

Then I found out from my mom-friends that there was a pro-life or Catholic family conference going on in Philadelphia. Because of our situation, I wouldn't be able to join them.

My memory of the details is hazy now, but I do remember having a temper-tantrum in our tiny bathroom, complete with a lot of tears, loud complaints, jutting jaw, and the throwing of a hair brush and ranting at God. I was suffering the young Catholic mom version of 'but ALL MY FRIENDS ARE GOING!' It was just directed at God, instead of at my parents.

'...all my friends get to do all kinds of great things for their family life: husband and wife date nights, Catholic conferences all over the place, home-school conferences, Bible studies, etc., but I never get to do ANYTHING! Well, I can’t give what I don’t have, and if You are not going to feed me, then I’m leaving You! I’m going to be an…an Atheist! So there!'

A little while after throwing the hair brush, yelling about Atheism, and hiccuping as I wiped my tears, a dear friend called me to say that she and her husband were covering my expenses for the conference so that I could come, too.

Soon, I was riding the train into Philadelphia with our kids and the stroller, nervous about getting off at the right station and walking to the hotel where the conference was taking place. I remember entering a street-level elevator area with a hallway and a sign indicating the direction to the conference rooms.

As I approached, the elevator doors suddenly opened, and out came Mother Teresa and two of her sisters. I think I froze in disbelief."

The encounter itself is mostly a blur to my mother's memory now. She was in shock when it happened. Mother Teresa was not a speaker at the conference to which we were going; she had not been listed as a featured guest. She was supposed to be at an event in Allentown, Pennsylvania, but it never occurred to my mom that Mother would suddenly show up in a then-deserted hallway near the conference center in Philadelphia.

So there my mom was, stunned. She was even in disbelief, asking herself, this is Mother Teresa, right?

And she felt deeply aware of her interior state before this holy woman.

My mom goes on with her story:

"Mother Teresa gave us a big smile, saying 'Beautiful, beautiful!' (If only she knew that I had just been yelling at God!) She was peaceful—and then she was gone.

The only other memory I have of that conference was being in the confession line with five tired children, the youngest ones just wanting to run around. I was ready to confess my sins even if I had to do so with you little ones listening to my confession, but a very kind soul gathered all of you around her so that I could really have that time with God. I was able to make a beautiful, grace-filled confession with a very understanding priest. God tests us, and often lets us hit our limit, but then He provides us with more than we ask for."

Notice how Mother Teresa, when looking at my mother and my little siblings and I, saw beauty. My mom certainly didn't feel beautiful at the moment—but Mother Teresa could see past the exterior, and know that such mothers are pouring themselves out in self-sacrifice.

I think this story can be an encouragement for all moms. Mothers give all of themselves, and they often feel utterly spent, as well as utterly alone. Their spiritual lives can feel dry, fragmented, or even non-existent.

But the Lord has a special tenderness for mothers. He does sustain them; He does hold them close to His heart; He stays with them.

He gives unexpected gifts, like a personal, one-on-one encounter with Mother Teresa, despite our unworthiness.

These gifts say I love you.

"I hope the re-telling of this story is useful!" my Mom says. "Young Catholic moms struggling to live the faith in our career-driven, materialistic world are often isolated and lonely—I often was. Even with my dear Catholic mom friends. We all knew what it was like to live on one income with large families: but it is all worth the sacrifice." 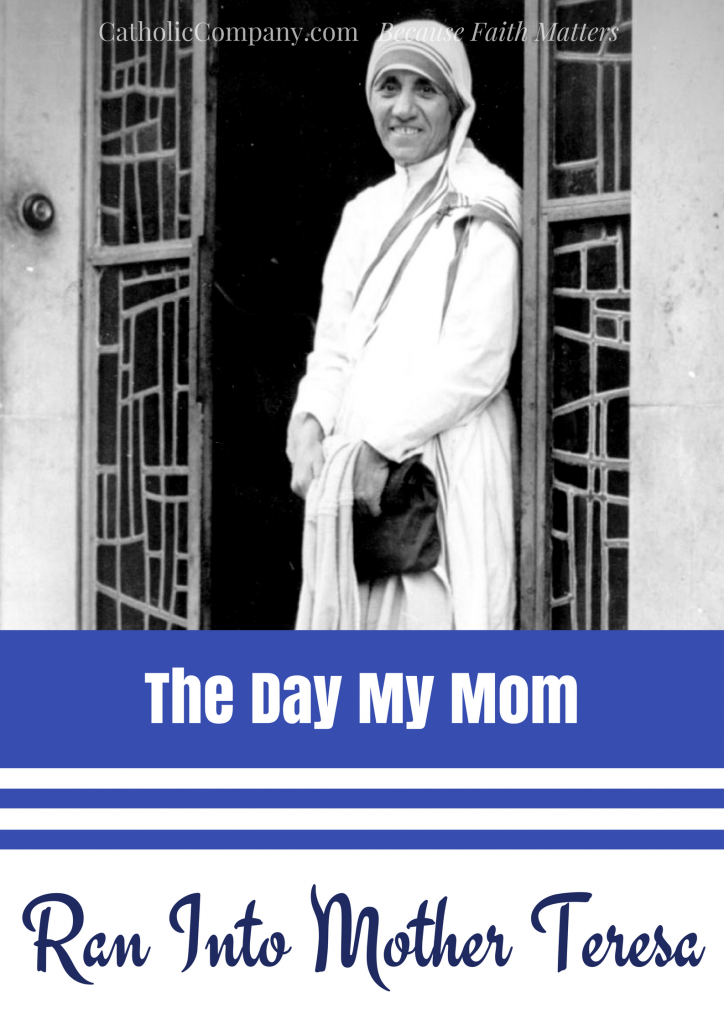 Veera ghadiali says
Sep 4 2017 2:39PM
After reading the above i think i am so lucky to have stayed just opp. her missionary of charity home in park circus Calcutta . We had a lot of interaction with them and passing her on the streets was just so natural to us. This tiny angel of a lady dressed in white and blue and soft spoken .

When my sister expired at the age of 21 she came to visit us and took my mothers hand in hers and said ....". its as written ... he loved her so much that she was called to Him."

We can never forget her she was so loved and respected .... you should have seen the line of old and young outside her gates.

I could go on an on.....May her soul enjoy eternal peace and may her love still shine on us ....amen.

So grateful for these wonderful gifts from our Lord.

So grateful for the opportunity to serve Him through my husband and children for the better part of my life. Others may not see this treasure, but He does. Our Blessed Mother is my teacher and I like to see her smile.

Praying for you Genevieve and for the desires of your heart.

Roberto says
May 14 2017 10:18PM
May God bless all Mother's this weekend of Fatima celebrations

Stella says
May 14 2017 5:49PM
Thank you I really needed this story today, was feeling a little like your mom except for wanting to convert to an Atheist! LOL! Yep its mothers day and i am the one making sandwiches and serving everyone just the way they like it! Well what can i say with a house full of men that need Ma Ma. All my family and friends are going out to dinner, taken to a vacation and i am sitting here at home wondering when my day will come when i will be catered to. Well i know that God knows my heart and i believe that that day will come ^i^

Maria says
Sep 4 2016 7:53AM
I had just been feeling the "no end to the housework, why can't everybody do your part". And this story comes as a blessing. I watched live telecast from home, very grateful and feeling special that I am a witness to a saint being declared in my lifetime! All those who met Mother Teresa in person are so blessed. So are the rest of us who believe in the God that Mother Teresa believed. Thanks for sharing the story.

Kimberly says
Sep 2 2016 11:23AM
In 1981, I, too, ran into Mother Teresa in an elevator in Washington D.C. I was six months pregnant with my first child, married and 23 years old. I will admit, I was a little afraid of motherhood. Mother Teresa smiled at me and saw my pregnant belly. It is a memory that I carry today...and will think of on September 4. I felt a blessing from her that day.

Genevieve Cunningham says
Sep 2 2016 11:34AM
That's so beautiful, Kimberly! Thank you for sharing your story with us! God bless you and yours!

Genevieve Cunningham says
Sep 2 2016 7:59AM
It was indeed a blessing! And thank you all you for your comments. We are so glad this story could be shared, and my Mom hopes it bring consolation to others--especially mothers!