During her life and after her death, Grace Kelly captivated people. She radiated elegance, beauty, class, femininity, and poise. She was both an icon and an ideal. At the same time, she was modest and unpretentious. Fans revered her, her husband Prince Rainier III was devoted to her, and even those who had worked with her in the entertainment industry were struck by her personal character and her gentleness toward other people.

"I adored her," said actress Celeste Holm, who starred with Grace in the 1956 film High Society. "She was thoroughly and constantly considerate of other people, first. So as far as I was concerned she was a princess long before she married a prince."

What many people today do not realize is that Grace Kelly was a Catholic, and a practicing Catholic at that. It wasn't merely nominal or cultural. Like the rest of us who are far from saintly, Grace may not have lived it out in a perfectly exemplary way—at least, not during her whirlwind career in Hollywood—but she did not abandon it, either. It had formed her soul.

She assisted Fr. Patrick Peyton, founder of Family Theater Productions and the Family Rosary Crusade, by participating in a special Easter production of his. That means we have beautiful footage of Grace Kelly praying the Hail Mary.

You can watch a video clip of this production below:

Quick note: Fr. Patrick Peyton's cause for canonization is underway. As of December 2017 he is now Venerable Patrick Peyton. His life story is beautiful and I highly recommend looking him up and learning more about his story and his work.

And for further reading, read this article about the Catholic faith of Grace Kelly. 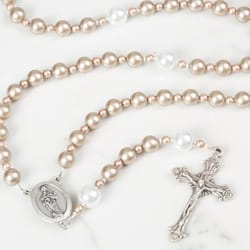 L'Innocence Rosary
Recommended for you 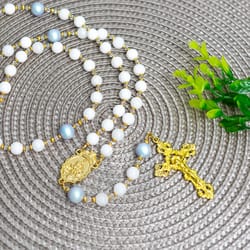 Not The Lent We Wanted (And What To Do About It)

By Mary Clare Peoples
Recommended for you