Catholics are eagerly awaiting the beatification of Archbishop Fulton J. Sheen, whose profound, practical, and even electrifying teaching has pierced hearts around the world.

This past July, the Catholic Church approved the miracle that makes possible this next step in the canonization process. No date has been set at this time, but there have been hopes that the beatification would take place not long after September 20th, 2019, the 100th anniversary of Sheen's priestly ordination.

And what is the miracle that made this holy event possible?

In anticipation of the beatification, we were able to speak with Bonnie Engstrom, whose son was miraculously saved—his  health and normal functioning made possible—through the intercession of Fulton Sheen, in September of 2010. Bonnie believes that this miracle was not for her family alone, but for the whole Church.

Her story should inspire all of us to turn to Venerable Fulton Sheen for prayers, especially for the renewal of holiness in the priestly, religious, and married life. "He’s the man of the hour for the Church," Bonnie Engstrom told a reporter at the National Catholic Register.

And she would know.

GetFed: Did you and your husband have a spiritual friendship with Archbishop Fulton Sheen before the miracle?

Bonnie Engstrom: Yes. My husband, Travis, and I started to learn about Fulton Sheen by watching his TV show on YouTube while I was pregnant with James. We decided at that point we would name our child after Fulton Sheen [calling him James Fulton] and began praying for his intercession then. GF: What was the crisis that led you to beg for Sheen's intercession?

BE: When our son was born he had no signs of life, due to a knot in his umbilical cord which had tightened and cut off his oxygen supply during delivery. He would not respond to CPR or any kind of medical intervention and we invoked Sheen's name, asking him to pray for us and for our son.

GF: So your son was dead for 61 minutes. What happened next, after you prayed to Fulton Sheen?

BE: We had invoked Fulton Sheen soon after James' birth. At the end of those 61 minutes the doctors stopped working on James so they could call time of death. It was at that moment, when every option had been exhausted and ineffective, that James' heart began to beat again.

GF: How much time passed before it was clear that there were no physical side effects James would suffer from?

BE: In a matter of days James was doing things we didn't think he'd be able to do, but for us to understand the fullness of his healing we had to wait months and even years as he hit milestones like every other child.

GF: How did the reality of this miracle impact you and your prayer life?

BE: For me, the biggest impact to me and my prayer life came before I knew a miracle had truly happened. It was in a moment of anger and despair that I called out to God and He responded by asking me, "Who do you know Me to be?" God had shown Himself to be faithful and generous and He asked me to trust that He would continue to be, even if we did not get our miracle, even if James had a hard life, even if James died.

GF: Did your perspective on relationships with the saints change after experiencing Fulton Sheen’s intercession?

BE: No. Fortunately I had witnessed friends and family who had beautiful friendships with the saints so I knew that I could count on them for prayers, love, and encouragement.

GF: What’s the most challenging part of being in the public eye through frequent interviews?

BE: The most challenging part is protecting my son's privacy—he just wants to be a normal boy!—and making sure the attention is always shifted back to God because it was Jesus Christ who healed James and I want Him to receive all the glory.

GF: What is your family's favorite prayer or devotion?

BE: I think my kids most look forward to the Jesse Tree every year. Every night in Advent we read Scripture, discuss the story, and hang an ornament on our Jesse Tree. But I have a strong devotion to the Sacred Heart and we frequently rely on "Lord, have mercy" and Hail Marys.

GF: Do you have practical tips for how parents can help their kids foster friendships with the saints?

BE: I think having the children invoke their patrons in prayer and celebrating the feast days is a great place to start! We pray a family litany and it's helped my kids to understand whose patronage they are under. We also encourage them to ask their patron saints for prayers when they are scared, worried, or celebrating something.

GF: What does James Fulton think of Fulton Sheen?

BE: He likes him, although he'd rather watch a cartoon than Life Is Worth Living.

GF:  Thank you for your time, Bonnie! God bless you and your family. 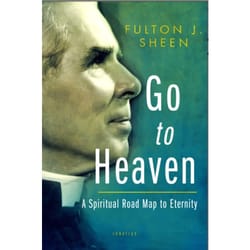 Go to Heaven: A Spiritual Road Map to Eternity
Recommended for you 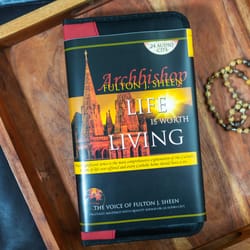 Colana Hutchinson says
Nov 18 2019 6:54PM
How wonderful! Let us continue to pray for his canonization.
Click to view comments