The Story of St. Bernadette and Our Lady of Lourdes

February 11 is the feast day of Our Lady of Lourdes, one of the most famous apparitions of the Blessed Virgin Mary that took place in southern France. On this day in 1858 a young, poor girl named Bernadette Soubirous was out collecting firewood with her sister and another friend near a grotto when she saw a vision of a lovely lady.

In the words of St. Bernadette,

"I raised my head and looked towards the grotto. I saw a Lady dressed in white, wearing a white dress, a blue girdle and a yellow rose on each foot, the same color as the chain of her Rosary."

In the vision Our Lady was praying the rosary. 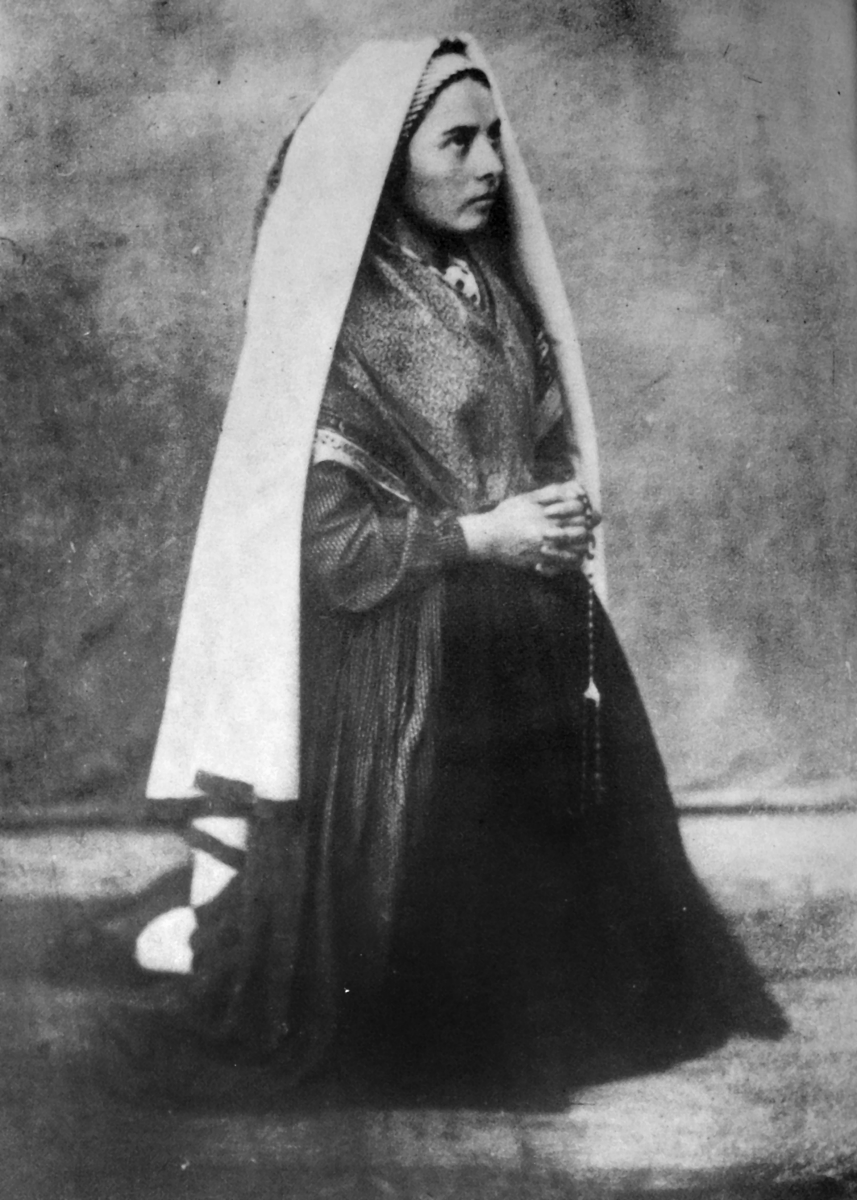 At these subsequent visits the Lady (who had not yet identified herself as the Blessed Virgin Mary) asked for a chapel to be built on the grounds, for Bernadette to pray for the conversion of sinners, and for her to drink the spring water that was revealed to her at the grotto.

Word of these apparitions spread rapidly and caused quite a stir in town. In response, Bernadette was detained, interrogated, and harassed by the civil authorities as if she were a common criminal. The villagers, however, came to her rescue and demanded that the child be released.

Through all these difficulties that came to her because of the apparitions, Bernadette was given an interior strength:

"There was something in me that enabled me to rise above everything.  I was tackled from all sides, but nothing mattered and I was not afraid." 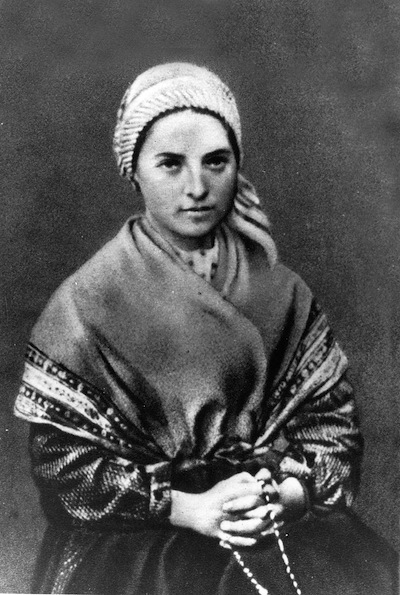 Many of the townspeople believed that Mary was appearing to Bernadette, and they came down in large numbers to the grotto to pray. The spring that the Lady asked Bernadette to drink from quickly revealed itself to be blessed water with miraculous healing properties.

On March 25th, the Feast of the Annunciation, the Lady appeared at the grotto again, this time identifying herself as the Immaculate Conception.

"With her two arms hanging down, she raised her eyes and looked up at the sky, and it was then that she told me, joining her hands together now at the height of her breast, that she was the Immaculate Conception. Those were the last words she ever said to me."

The Marian dogma of the Immaculate Conception had only recently been pronounced by Pope Pius IX a few years previous, on December 8, 1854. This infallibly defined dogma declared that the Blessed Virgin Mary, "from the first moment of her conception, by a singular grace and privilege of almighty God, and in view of the merits of Jesus Christ, Saviour of the human race, was preserved free from every stain of original sin is a doctrine revealed by God and, for this reason, must be firmly and constantly believed by all the faithful."

As for herself, Bernadette suffered much, not only through physical suffering due to her chronic poor health, but also through the jealousy and suspicion from others because she was given the grace of visits from the Blessed Mother. This proved true the words Our Lady spoke to Bernadette at the grotto, "I do not promise to make you happy in this world, but in the other." 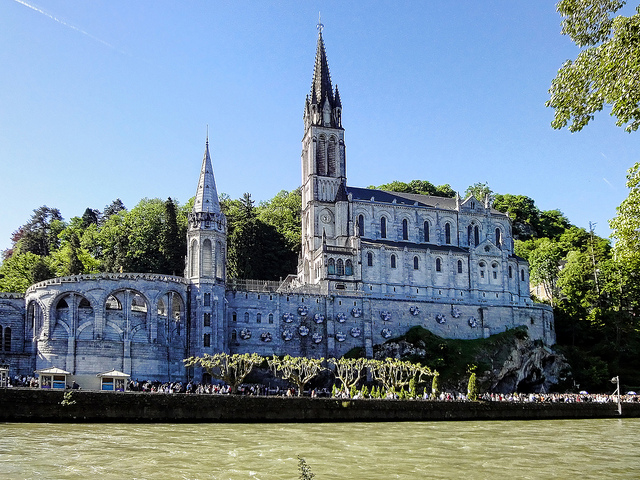 Four years after Our Lady of Lourdes appeared to St. Bernadette, the local bishop ruled that the apparitions were authentic. St. Bernadette eventually entered a religious house where she continued to suffer physically, uniting her suffering to Christ, and died at an early age.

Today a beautiful church has been erected on the grounds near the grotto at Lourdes. After Rome and the Holy Land, Lourdes, France is the most popular place of pilgrimage for Catholic faithful. The water of Lourdes is readily available to all pilgrims, and numerous healings have been medically documented to have occurred there, as well as conversions to the faith because of these miracles. St. Bernadette's feast day is February 18th. 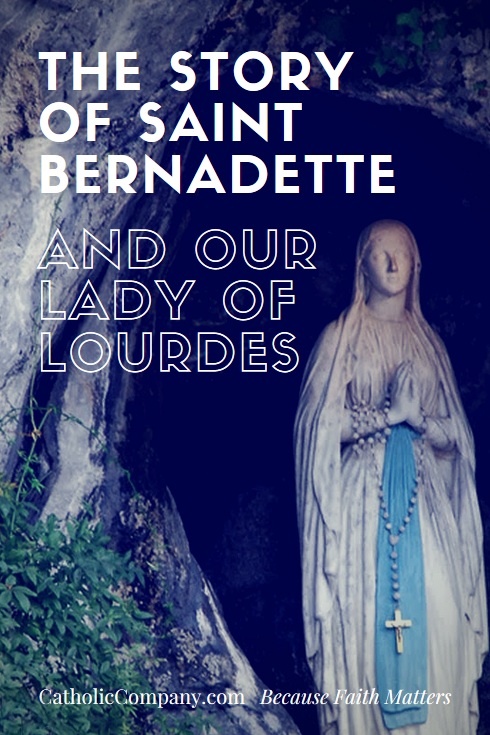 This article has been updated and was originally published in February 2013. © The Catholic Company. All rights reserved. 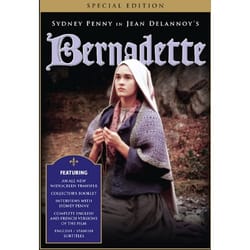 Bernadette (DVD)
Recommended for you 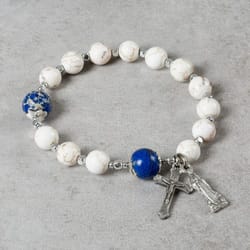 Lourdes Rosary Bracelet
Recommended for you 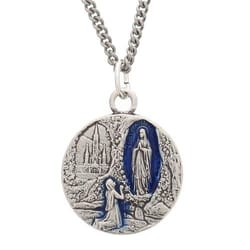 Joy Bernadette Okafor Izuka says
Apr 2 2020 6:18AM
I'm really blessed to know the story of St Bernadette and our Lady of Lourdes. My confirmation name is Bernadette. I hope to visit the apparition land someday. Blessed be the great mother of God Mary most holy.

Victoria Spalding, OFS says
Aug 14 2019 9:37PM
I led a trip to Lourdes France in 2000 and took 22 people. We visited Bernadette’s body in Nevers first. What an incredible experience to have Mass beside St. Bernadette’s body! My confirmation name is Bernadette also. I would love to visit the grotto again. I am praying that someone will paint the statue there to resemble Our Lady’s beauty. It would have such a huge impact on the reality of the apparition. Thank you, Jesus, for sending us your holy mother!

Thomas Chegash Sr says
Feb 23 2019 6:41PM
My wife and I pray the Holy Rosary on EWTN every weekend from Lourdes. I was so Blessed to read this history about the visits of our Blessed Mother. Thanks and God Bless you

Annie says
Feb 11 2019 11:18PM
I was so blessed to go to Lourdes,France with my church friends and experienced the mass in the Grotto where Mama Mary appeared to St. St. Bernadette and visited the humble place where St. Bernadette lived and the museum of the Apparitions. If given the chance again, I want to go back to Lourdes. I felt indescribable joy when I was there.

I made a pilgrimage to Fatima with three of my fathers sisters.

I thank the Mother of Our Lord Jesus Christ for her great love for us all. Joe Walker aged 81,

Filomena says
Feb 11 2019 2:26PM
I got to visit the Lourdes grotto in 2001 and was so happy l did. I brought some holy water back with me and pray that l was lucky to get to go there. I have a son who was born Our Ladys feast day and today he 57 years old. I believe in miracles and Our Blessed Virgin Mary and all that she does. Thank you Lord for giving me that chance to go.

Joleen says
Feb 10 2019 6:35PM
Wonderful article and story! My birthday is February 11th and I believe in the Blessed Virgin’s love, influence and power so much. I am 56 and have severe chronic pain everyday that no seems to be able to lessen... I need to learn to take my suffering and do more positive things with it and through it.

Mary says
Aug 24 2018 9:37PM
I was once a member of Birhen of Lourdes in our Town Church and it was so good and nice for me because it helps me strengthen my faith on her specially facing struggles in my journey since I was still a student. It helps me stand firm whenever I fell down in whatever mistakes I've made.. Thank you Mary of Lourdes for your unending love to us even if sometimes we are cruel and fool.. Hoping miracles to happen in our family..