Fear Not the Night: St. John of the Cross and Spiritual Darkness

St. John of the Cross was a priest, a Carmelite, a Doctor of the Church, and a writer of mystical poetry.

With a name like “of the Cross,” you might think that St. John was destined to imitate the Crucified Christ in a very real way. And you'd be correct in thinking so.

John's own way of the cross began long before he took that name as a religious in his late 20s. He was born in 1542 into a family steeped in poverty, and both his father and older brother died in John's youth.

After receiving a religious education in his childhood, John entered the Carmelites in 1563, at the age of 21. Slowly, he began to desire a more simple and austere life (the Carmelites had not yet regained many of the sacrificial practices by which the order is well known today). He became a priest and then considered joining the Carthusians, but an encounter with Teresa of Avila, and her vision of reforming the Carmelites, changed his mind. John decided to join the future saint in her efforts.

It was at this time that John took the name “of the Cross,” and of the cross he would be.

Not all of the Carmelite nuns and friars were happy with Teresa and John's desire to bring Carmel back to its roots; many had become content with the increasingly lax standards to which even Teresa herself had fallen prey over many years as a Carmelite.

While some friars did embrace St. John's leadership, other opposed him adamantly, and at times even violently. In 1577 John was ordered by superiors to stop the reforms and return to his original monastery, even though the reformed life had already been approved by the Papal Nuncio. As the Nuncio was a higher authority, John stayed put and continued with his work. 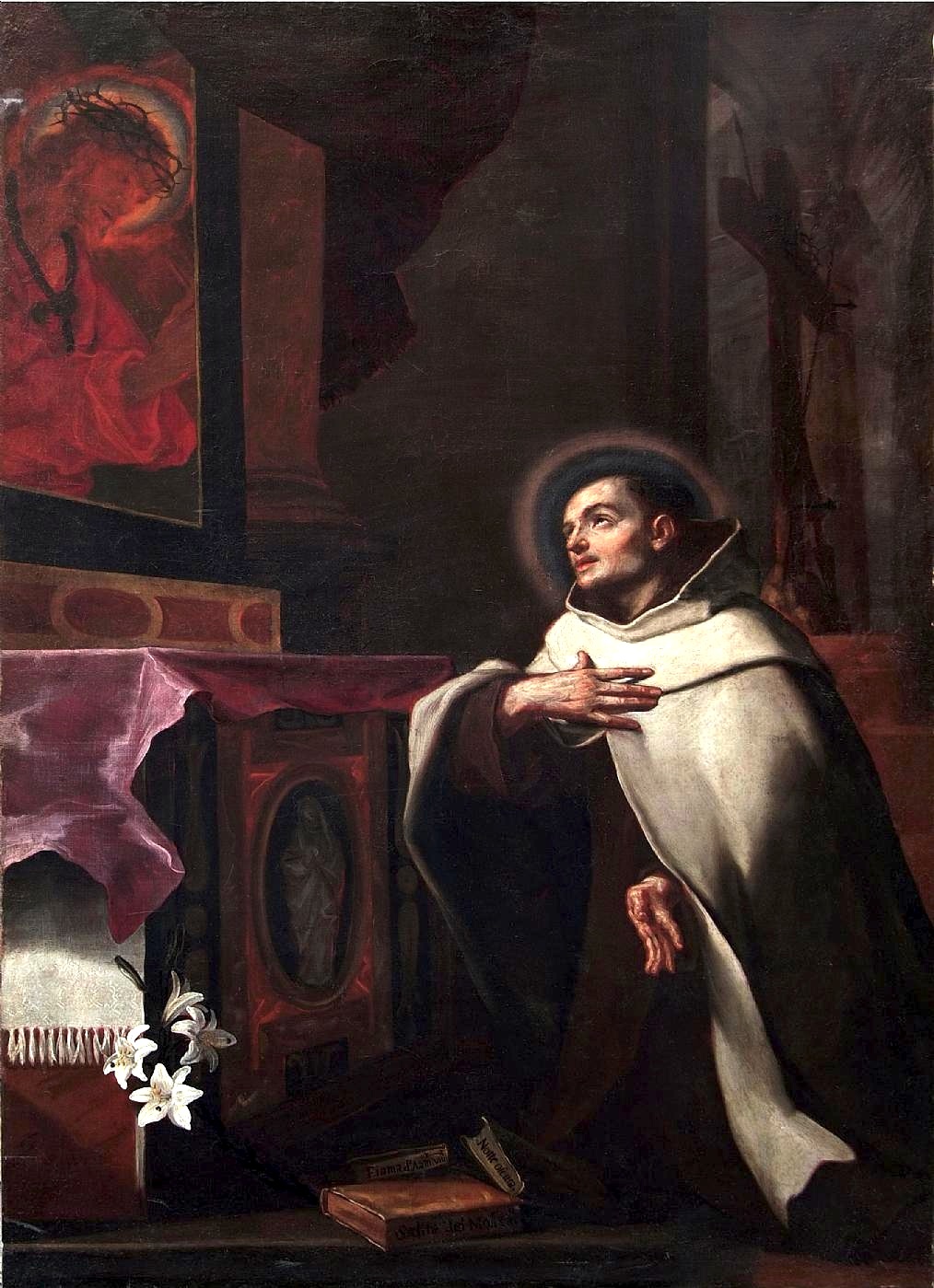 Later that year, disgruntled members of John's own community kidnapped and imprisoned him. For nine long months, John was kept in a cell so small that he could barely lie down. He was fed only bread and water, and was lashed on a weekly basis. The only possessions in the cell were a prayer book and an oil lamp… well, and the secret writing materials smuggled to him by the frightened but sympathetic friar who guarded his cell.

In was during these long, dark, painful months that St. John of the Cross composed and recorded some of the most beautiful Spanish mystical poetry the world has ever known. On scraps of smuggled paper he wrote incredibly moving stanzas based on the biblical book the Song of Songs and on his own experience with physical, mental, and spiritual darkness.

Eventually John escaped his captors and rejoined St. Teresa to continue the Carmelite reforms, traveling around Spain to establish new monasteries. He died in 1591 from an infection.

The Fruit of Darkness

Even a simple glance at St. John's poetry reveals a depth and richness that can be understood only by living the reality spoken of. It was in St. John's darkest time that Our Lord drew him close and gifted him with words to poignantly describe the journey of the soul, and the path to God that inevitably passes through darkness.

John writes profoundly about the feeling of having lost God, of questioning where He has gone and searching for Him to seemingly no avail, and of His closeness found even when sight and senses fail.

I'll close with some verses from two of John's most well known works: The Spiritual Canticle and The Dark Night of the Soul, and invite you to explore the poems in their entirety!

Where have You hidden Yourself,

And abandoned me in my groaning, O my Beloved?

I ran after You, crying; but You were gone.

O shepherds, you who go

Through the sheepcots up the hill,

If you shall see Him

Whom I love the most,

Tell Him I languish, suffer, and die.

In search of my Love

I will go over mountains and strands;

I will gather no flowers,

I will fear no wild beasts;

And pass by the mighty and the frontiers…

ANSWER OF THE CREATURES

He passed through the groves in haste,

And merely regarding them

Clothed them with His beauty.

Oh! who can heal me?

Give me at once Yourself,

Send me no more

Who cannot tell me what I wish.

All they who serve are telling me

Of Your unnumbered graces;

And all wound me more and more,

And something leaves me dying,

I know not what, of which they are darkly speaking.

This heart, have You not healed it?

And why, after stealing it,

Have You thus abandoned it,

And not carried away the stolen prey?

For no one else can soothe them;

And let my eyes behold You,

For You are their light,

And I will keep them for You alone.”

"On a dark night, Kindled in love with yearnings—oh, happy chance!—

I went forth without being observed, My house being now at rest...

In the happy night, In secret, when none saw me,

Nor I beheld aught, Without light or guide, save that which burned in my heart.

This light guided me More surely than the light of noonday

To the place where he (well I knew who!) was awaiting me—

A place where none appeared.

Oh, night that guided me, Oh, night more lovely than the dawn,

Lover transformed in the Beloved!

…With his gentle hand he wounded my neck

And caused all my senses to be suspended.

I remained, lost in oblivion; My face I reclined on the Beloved.

All ceased and I abandoned myself, Leaving my cares forgotten among the lilies." 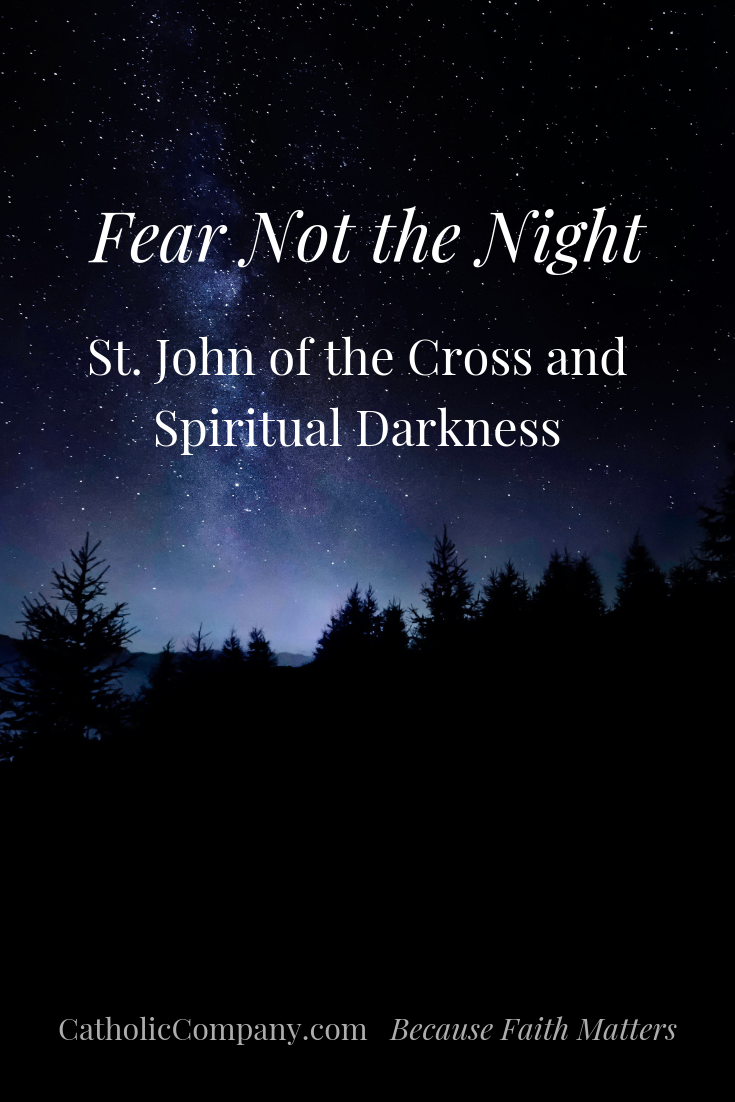 Blake Robinson says
Dec 14 2018 5:53PM
Hi Ashley, thanks for the post. I appreciated that you highlighted St. John of the Cross's poetic talent and linked it to his time of imprisonment. We all too easily overlook the fruits of darkness.
Click to view comments