Ever Ancient, Ever New: A New Feast For Mary, Mother of the Church

The Monday after Pentecost is a Marian feast day.

It’s alright if you didn’t. After all, Pope Francis only just declared the feast of Mary, Mother of the Church, to be a permanent memorial in March of 2018. 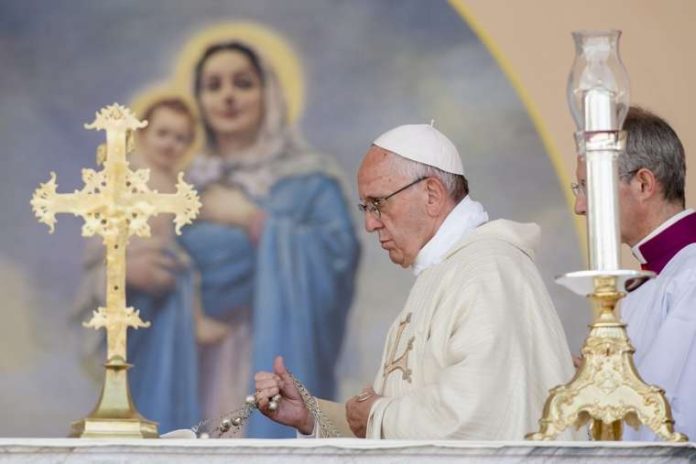 Why Mary, Mother of the Church?

Since the earliest days of Christian history, Catholics have referred to the Church—and to Mary—as "Our Mother."

In the 3rd century, an African writer named Tertullian penned the breathtaking phrase that spoke of Mary and the Church as the “New Eve.” Just as Eve was the mother of all the living (which the name “Eve” literally means) so Our Lady and the Church are our spiritual mother in the Mystical Body of Christ.

Mary became the Mother of Christ at the Annunciation, and the Mother of all Christians at the foot of the Cross. Finally, she was present at Pentecost, which is celebrated as the “birth” of the Church. This Church, first led by the Apostles under Our Lady’s care, would unite, nourish, and strengthen all of the faithful, just as any good mother would. 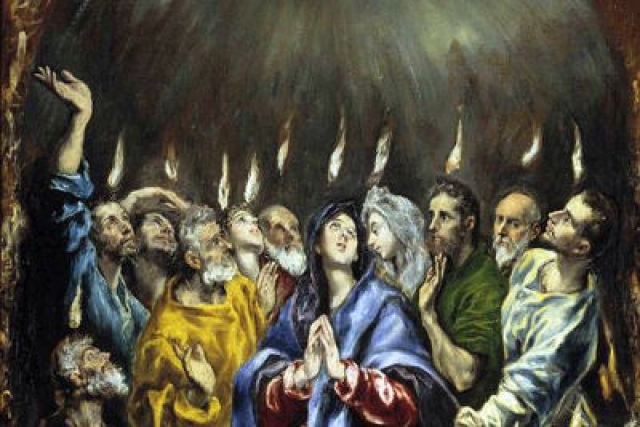 Where else do we see this?

Proper focus on Mary as the gentle-yet-strong Mother of the Church has surfaced most strongly when the Church needed it most.

One such period was the 5th century.

At the beginning of the 400s, Marian theology was viciously debated, especially by Nestorian, who attacked the concept of Mary as Mother of God. The declaration of Mary as the Mother of God was an important part of the ensuing Council of Ephesus in 431 AD.

Later in the same century, St. Leo the Great spoke about the connection between Our Lady’s motherhood of Christ and the founding of the Church.

“[Mary] is clearly the Mother of his members; that is, of ourselves, because she cooperated by her charity, so that faithful Christians, members of the Head, might be born in the Church. As for the body, she is the Mother of its Head…Mary gave birth to our Head; the Church gave birth to you. Indeed, the Church also is both virgin and mother, mother because of her womb of charity, virgin because of the integrity of her faith and piety.” 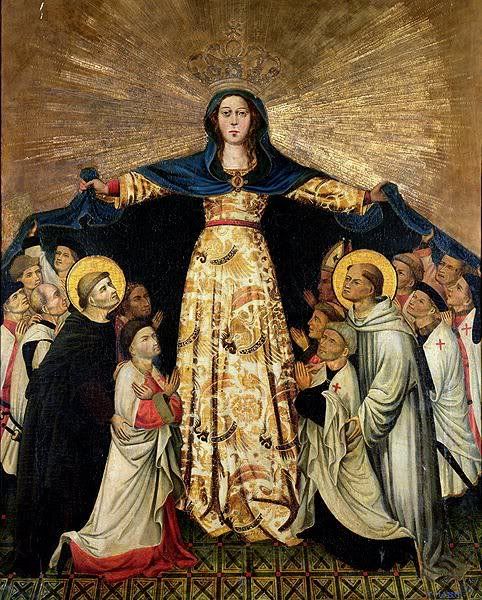 Another wave of emphasis on this connection can be found in the recent 20th century: 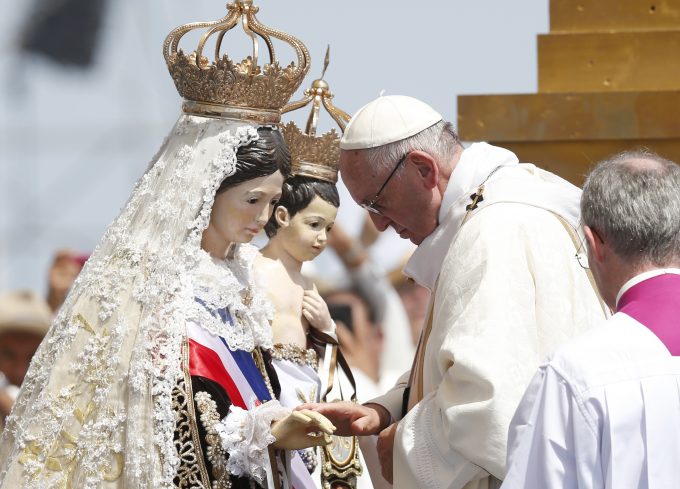 The idea of Our Lady and the Church as Mother are especially close to the heart of Pope Francis, who spoke about this in a powerful off-the-cuff reflection, one that he delivered to the cardinals just before the very electoral conclave that would elect him Pope.

In that message, Pope Francis spoke of the Church as needing a leader who would help Her to “be the fecund mother who lives ‘by the sweet and comforting joy of evangelizing.’”

Pope Francis has shown his love for Mary, our dedicated and tender Mother, through his devotion to Our Lady Undoer of Knots: a devotion which he effectively brought out of obscurity and into the light of public knowledge and widespread veneration.

Why is this happening now?

In an official decree published by the Congregation for Divine Worship and the Discipline of the Sacraments, Cardinal Robert Sarah reflects: “Mary is the mother of the members of Christ, because with charity she cooperated in the rebirth of the faithful into the Church...the birth of the Head is also the birth of the body, thus indicating that Mary is at once Mother of Christ, the Son of God, and mother of the members of his Mystical Body, which is the Church.”

Sarah wrote that with the institution of this celebration, the Pope hopes to “encourage the growth of the maternal sense of the Church in the pastors, religious and faithful, as well as a growth of genuine Marian piety.” 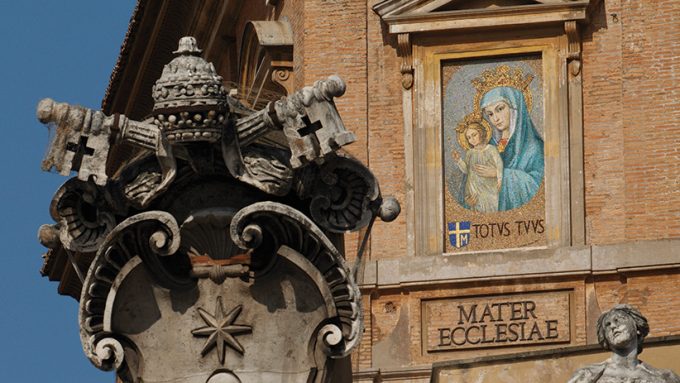 A mosaic of Mary, Mother of the Church in St. Peter's Square (CNS photo/Paul Haring)

Because the memorial of Mary, Mother of the Church, will always fall on the Monday after Pentecost, Sarah added that the new feast day will “help us to remember that growth in the Christian life must be anchored to the Mystery of the Cross, to the oblation of Christ in the Eucharistic Banquet and to the Mother of the Redeemer and Mother of the Redeemed, the Virgin who makes her offering to God.”

Mary, Mother of the Church, pray for us! 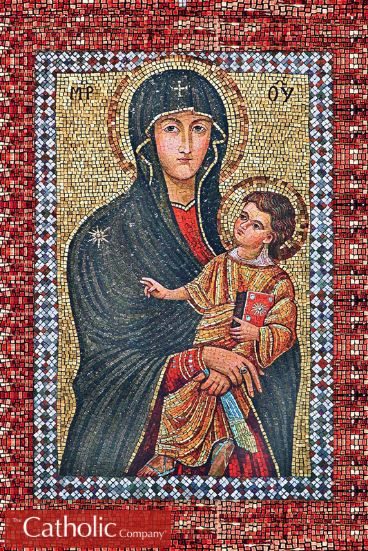 For breathtaking Catholic items featuring the image of Mary, Mother of the Church, click the image above!

Are you excited about the new feast day?

How has Mary shown herself a mother to you? 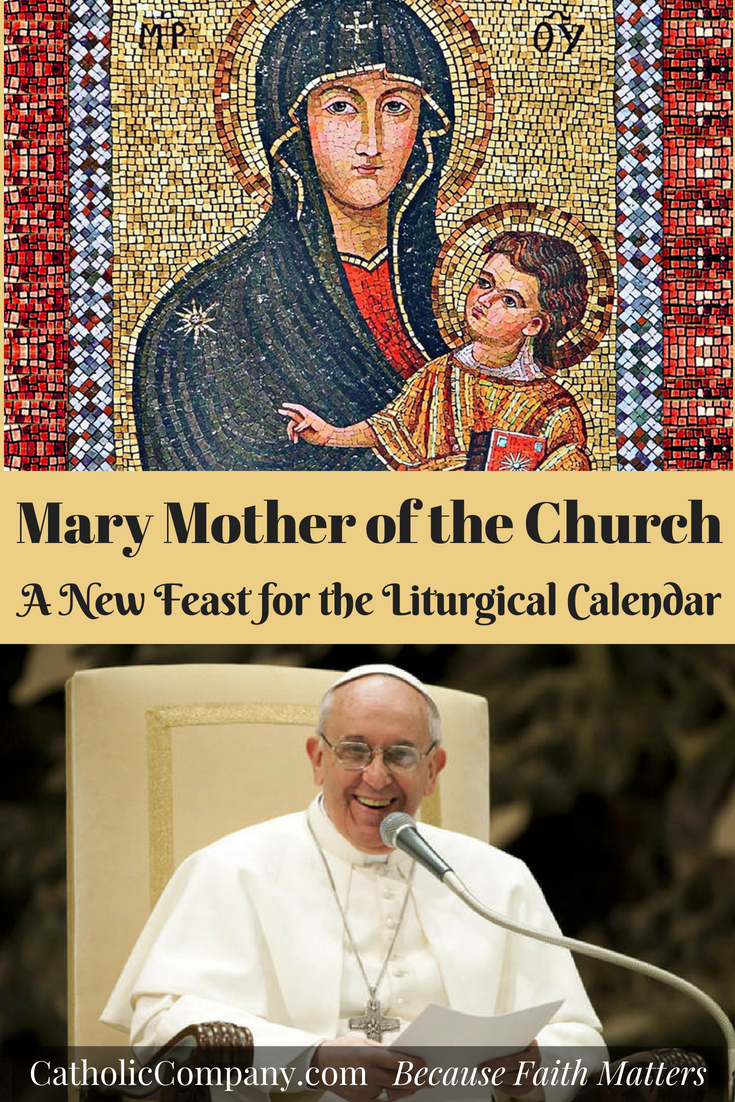 EARLENE MIRE says
Jun 26 2018 8:38PM
I have been reading and studying the book, Unabridged Christianity, written by Fr. Mario P. Romero. This is a wonderfully insightful book which is cross-referenced to the Catechism of the Catholic Church.

I am 72 years old and was born into and baptized into the Catholic faith. I also was confirmed at the proper time. My mother, praise God, did the best she could, under her difficult circumstances, to raise me in my Catholic faith.

As a young woman, not trained in the importance of building a Catholic foundation for my future family, I married a man who was of a protestant faith. Therefore, leaving the Catholic faith at the age 19, I left my roots as a Catholic without the wisdom of the Church. I believe, this departure from my roots was the core reason my marriage ended in divorce 18 years later.

After being divorced for 6 years, my Lord God chose to pick a new husband for me, since I clearly did not depend on Him the first time.

We have been married, in a Civil sense, for going on 27 years. He too was raised Catholic and left his faith when he married a protestant woman. So we were both Baptist when we met. Over the past 26 years, I followed along with him in this faith. All the while, I was not fulfilled in our worship services and Bible study. Then, in the last few years, I was struggling with going back to my roots. But, with all of the false teachings I received about the Catholic faith, I remained in the Baptist church. Confused between what I heard, and what I felt deep inside my soul was the truth.

Finally, my husband, who was most concerned with my struggle, said, "Honey, If you feel that going back to the Catholic Church is what you need, then I will go too." So, we began the process of following all of the requirements to be able to return to our roots. We were married by the Church on February 14, 2018.

Truly, I have has such a sense of peace. I know for sure that this was the right decision.

And I quote: The most Blessed Virgin Mary was, from the first moment of her conception, by a singular grace and privilege of almighty God and by virtue of the merits of Jesus Christ, Savior of the human race, reserved immune from all stain of original sin.

Mark Miravalle writes about the sinlessness of Mary:

" The early Church Fathers also compared Mary's sinless state as being identical to Eve's state before the participation of Eve in Original Sin. Mary as the New Eve, was seen to be in the same state of original grace and justice that Eve was in when she was created by God. Since Eve was obviously conceived in grace, without the fallen nature that we receive due to Original Sin, the parallel made by the Church Fathers between Mary and Eve before the fall illustrates their understanding of Mary's likewise immaculate nature.

In the words of St. Ephraem {d. 373}: Those two innocent...women, Mary and Eve, had been [created] utterly equal, but afterwards one became the cause of our death, the other the cause of our life.

… God's original plan was for all humans to begin their existence in the family of God in the state of sanctifying grace. Mary, rather than being the exception, fulfills in a real sense the original intention of what God wanted for all His human children: to be members of His family from the first moment of their existence."

I am not where I need to be in the practice of honoring our Mother, but I am closer than I have been for a long time. And, I can see God working to bring me to a more perfect relationship with Him, His son Jesus, and His Mother Mary.

Be sure to look into getting the above mentioned book. It has been such a help with Biblical answers to common questions about the Roman Catholic faith.

Praise be to God!

Mary says
Jun 18 2018 1:25PM
I thank the Holy Spirit for helping me and granting my prays helping my family I thank the sacred heart of Jesus our lady st Anthony st Jude st Ann

Maria Calder says
Jun 3 2018 12:43PM
I am blessed that I was born and raised in Portugal a country where Our Lady was venerated from it’s beginning and consecrated to the Immaculate Conception where Mary chose to appear to the 3 young shepherds! When I followed my husband to America, 35 years ago we ended up living in Garner, NC and my parish is Mary Mother if the Church one of the first consecrated with this denomination! In Portugal most girls first names used to be Maria which is my name usually followed by another. Mine is Maria João (John). Anything for Mary !

Jess & Terry Villahermosa says
Jun 1 2018 10:28AM
Since my husband & I became members of the Legion of Mary our loving and personal relationship with the Lord has been deepened and enlivened through increased love, dedication, devotion and service to Our Lady, our sweet & gentle Mother who leads closer to Jesus, the Head of the Church!!

Nancy says
May 21 2018 9:15PM
Amen...I met some ladies recently they claimed they pray to God and only him. The never pray to Mary! I would not know so much about God if not for Mary. They said she is dead. I was shocked - they really are missing out on their prayer life.

Patricia says
May 21 2018 12:56PM
Blessed to have this Mother of the Church made into an official day of honor.

Madonna says
May 20 2018 10:04AM
I try to think of the words that could tell Mary how much I love her. I try to feel how much she loves Jesus and the Church. I am pleased about the new Holy Day because it will try to make clear how I feel and will demonstrate how we, as Church, love and need our Mother.
Click to view comments