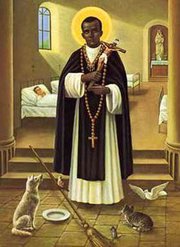 Saint Martin de Porres was, according to saint.sqpn.com, the illegitimate son of a freed black slave. At age 11 he became a servant of the Holy Rosary Dominican priory in Lima, Peru. In 1603, after years of begging and catering to the sick, he would become a Dominican brother after his superiors dropped a stipulation which stated that, “no black person may be received to the holy habit or profession of our Order.” After becoming a brother, St. Martin de Porres established an orphanage and children’s hospital for the poorest of the young. He is remembered for nursing stray cats and dogs to health as well. Saint Martin de Porres is attributed with many miracles through his intercession including raising of the dead. His feast day is November 3rd.

jerook.com says
Jul 1 2015 8:07AM
Thanks for ones marvelous posting! I genuinely enjoyed
reading it, you could be a great author.
I will ensure that I bookmark your blog and will eventually come back in the foreseeable
future. I want to encourage that you continue your great writing,
have a nice afternoon!
Click to view comments