The Battle Cry of St. Michael the Archangel

The most extraordinary and staggering conflict that ever took place happened not between men, but in the heavens, before the dawn of man on earth. Sacred Scripture gives us this history in Revelation 12:7-9:

“Then war broke out in heaven; Michael and his angels battled against the dragon. The dragon and its angels fought back, but they did not prevail and there was no longer any place for them in heaven. The huge dragon, the ancient serpent, who is called the Devil and Satan, who deceived the whole world, was thrown down to earth, and its angels were thrown down with it.”

As St. Michael and the good angels fought, and the celestial battle raged in heaven, Michael’s battle cry rang out: “Who is like unto God?”

Who is like unto God, indeed! Who can be elevated above the Creator of the Universe, or held superior to the Author of Life? This battle cry was not a question seeking an answer, but an affirmation of the power and authority of the Lord. It assures the listener that, indeed, no one is like unto God. The heavenly battle was not the end of angelic or spiritual warfare. It was only the beginning. With St. Michael the Archangel as their celestial captain, our angelic protectors constantly behold the Beatific Vision while defending and guarding the world and mankind from evil. They also inspire, communicate, heal, and lead us to God in heaven. At the front of the battle lines, leading this charge, is the glorious St. Michael, whose feast day is September 29.

The war cry of St. Michael is as relevant today upon the earth as it was before the dawn of time. It resounds in the hearts of those who love and acknowledge God.

And St. Michael continues to defend the Lord and men. Trusting in the power of St. Michael’s protection, Pope Leo XIII wrote the beloved St. Michael Prayer sometime between 1884 and 1886.

Historical information varies as to the exact year and even the details surrounding the origin of the prayer. We do know that in a mystical vision received after saying Mass in his private chapel, Pope Leo XIII saw and heard the devil planning a terrifying attack against the Church; he understood, it seems, that evil would infiltrate it. Regardless of the details of this account, we know that Pope Leo composed the Prayer to St. Michael in response. He decreed that all priests recite this prayer with the faithful after every low mass for the protection of the Church and mankind. It was also used in exorcisms to invoke the protection of St. Michael.

This prayer is a part of what are now known as the Leonine prayers, being named for the pope who assembled them. (Learn a more complete history here.) Devotion to St. Michael was, and is, ancient and widespread. St. Leo’s prayer to him continued to gain momentum throughout the Church. Eventually the “prayer after Mass” was discontinued in 1964 after the introduction of the New Rite. In 1994, Pope St. John Paul II exhorted the faithful to not forget this prayer. He recommended that we pray it frequently for protection against the dark forces waging war in the world.

Here is the prayer to St. Michael the Archangel, derived from the Leonine Prayers:

Saint Michael the Archangel, defend us in battle, be our protection against the wickedness and snares of the devil. May God rebuke him we humbly pray; and do thou, O Prince of the Heavenly host, by the power of God, cast into hell Satan and all the evil spirits who prowl throughout the world, seeking the ruin of souls. Amen.

This prayer, and the Archangel himself, are a powerful protection against evil. St. Michael has delivered victory to armies, stopped plagues, cast out demons, healed the sick, and protected those in danger. He has appeared to saints and spoken to everyday men and women who invoked him. His protection is absolutely necessary today, as the future evil witnessed over 100 years ago by Pope Leo XIII becomes our own reality. The assaults of the devil on society, culture, and family are at their peak. The message of Our Lady at Fatima, the trials and tribulations within the Church, and many other events of our age demand the rallying cry of St. Michael: “Who is like unto God?”

In the face of the astounding rebellion of the human race, St. Michael stands as the Prince of the Heavenly Hosts, guarding a world whose residents seem determined to dethrone and replace God. He sees clearly the insidious efforts of Satan to overthrow what God has made. He answers them still with the resounding cry, “Who is like unto God?”

The St. Michael Prayer is an important part of the history of our Catholic faith, and an important prayer for today. St. Michael will never cease to battle his enemy and ours. He is God’s marshal and standard-bearer, protector of Christians, helper of the sick and dying, heavenly guardian of Purgatory, and champion of the Church. He is present to all of us in spiritual combat. When you are in need of the armor of God, he is only a prayer away.

Do you pray to St. Michael?

Will you adopt his battle cry as your own? 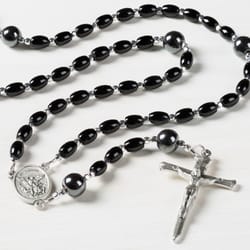 St. Michael Rosary
Recommended for you 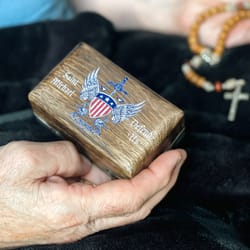 Nancy Yakshaw says
Dec 2 2019 9:24AM
I want to tell my grown sons how important St. Michael is to their daily lives. In todays world they need constant protection. I pray they will wear a St Michael medal. I plan to give them for Christmas.

Mariann says
Oct 23 2019 5:19PM
Yes, l say this prayer everyday. Sometimes several times a day . I am trying get our priests to say it after mass . I have a great devotion to St Micheal and ask for his intercession continuously.

Meg says
Oct 7 2019 11:51PM
We say the St. Michael prayer after every mass, as soon as the candles are snuffed. I say it myself occasionally, and in time of temptation.

Susan Mayock says
Oct 2 2019 8:48PM
I say this prayer to Michael the Archangel in defense of our President almost daily. He is not a perfect man but he defended God,faith and freedom of worship at the United Nations and in his rallies. I have lived on this earth about seven decades and never have seen a president treated with such disdain. Saint Michael the Archangel defend our country.

Marian says
Oct 1 2019 10:47PM
Our Bishop has instituted the recitation of the St. Michael prayer after masses said in our diocese.

Diana says
Sep 29 2019 11:34PM
I saw this prayer every morning for the protection of my family. Thank you St. Michael.

Theresa says
Sep 29 2019 8:20AM
Happy Feast Day St. Michael. Thank you for helping our family and being our friend. I miss you

Patricia Cannan says
Sep 28 2019 11:40AM
We have permission from our Bishop to say the St. Michael’s Prayer after the petitions at every Mass. We have done this for years. I believe we are the only church in our Diocese that has permission to do this. This church is St. Michael the Archangel, Emlenton, Pa. we are in the Erie Diocese.