Then & Now: The Apparition of Our Lady of Knock

August 21st is the anniversary of the Blessed Virgin Mary's apparition at a small village church in Knock, Ireland, in 1879. Known as Our Lady of Knock, it is a major Marian apparition approved by the Church and the one dearest to the Irish people.

The date on which Our Lady appeared had deep significance. Thirty-four years earlier, on the very same day, "The Great Hunger" had begun—a horrible time in which the potato crop, a primary source of food for the Irish people, failed. The famine that resulted was catastrophic. The starving people ate their potato seed in order to survive and then had nothing to plant come the following year. (You can read more about the famine and its effects here.)

Our Lady's miraculous appearance was a great consolation to those who suffered through the terrible famines and extreme hardships of that epoch in Ireland's history. Although it was a silent vision—Our Lady of Knock did not speak a single word—the peace and healing she brought was real and lasting.

What are the details of the apparition?

The Story of Knock began on the 21st of August, 1879 when, at approximately 8 o’clock in the evening, fifteen people from the village of Knock in Co. Mayo, witnessed an Apparition of Our Lady, St. Joseph, St. John the Evangelist, a Lamb and cross on an altar at the gable wall of the Parish Church.

The Lamb of God standing on an altar surmounted by a cross is a symbol of the Holy Sacrifice of the Mass and the Holy Eucharist. St. John was standing with a gesture of teaching while holding a book, presumably the Book of the Revelation, in which he described his vision of the heavenly liturgy.

According to an article published by the Knock Shrine:

The witnesses watched the Apparition in the pouring rain for two hours, reciting the Rosary. Although they themselves were saturated not a single drop of rain fell on the gable or vision. There were fifteen official witnesses to the Apparition, most of whom were from the village of Knock and surrounding areas and ranged in age from just 5 years old to 74 years old. Each of the witnesses gave testimonies to a Commission of Enquiry in October 1879. The findings of the Commission were that the testimonies were both trustworthy and satisfactory.

The vision lasted for approximately three hours before fading.

Here is the eyewitness testimony of Patrick Hill:

"I distinctly beheld the Blessed Virgin Mary, life size, standing about two feet or so above the ground clothed in white robes which were fastened at the neck.

Her hands were raised to the height of the shoulders, as if in prayer, with the palms facing one another, but slanting inwards towards the face; the palms were not turned towards the people, but facing each other as I have described; she appeared to be praying; her eyes were turned as I saw towards heaven.

She wore a brilliant crown on her head, and over the forehead where the crown filled the brow, a beautiful rose; the crown appeared brilliant, and of a golden brightness, of a deeper hue, inclined to a mellow yellow, than the striking whiteness of the robes she wore; the upper parts of the crown appeared to be a series of sparkles, or glittering crosses. [I saw her eyes, the balls, the pupils and the iris of each.]

I noticed her hands especially, and face, her appearance.

The robes came only as far as the ankles; I saw her feet and the ankles; one foot, the right, was slightly in advance of the other.

At times she appeared, and all the figures appeared, to move out and again to go backwards; I saw them move; she did not speak; I went up very near; one old woman went up and embraced the Virgin’s feet., and she found nothing in her arms and hands; they receded, she said, from her."

This unusual apparition occurred against the outer south wall of the parish church, as seen in the photograph below where the people are gathered. Today the church has been extended with a partial-glass ceiling to incorporate this outside wall as an inside wall. Erected against the south wall are statues that resemble the eyewitnesses's descriptions of the vision as closely as possible. 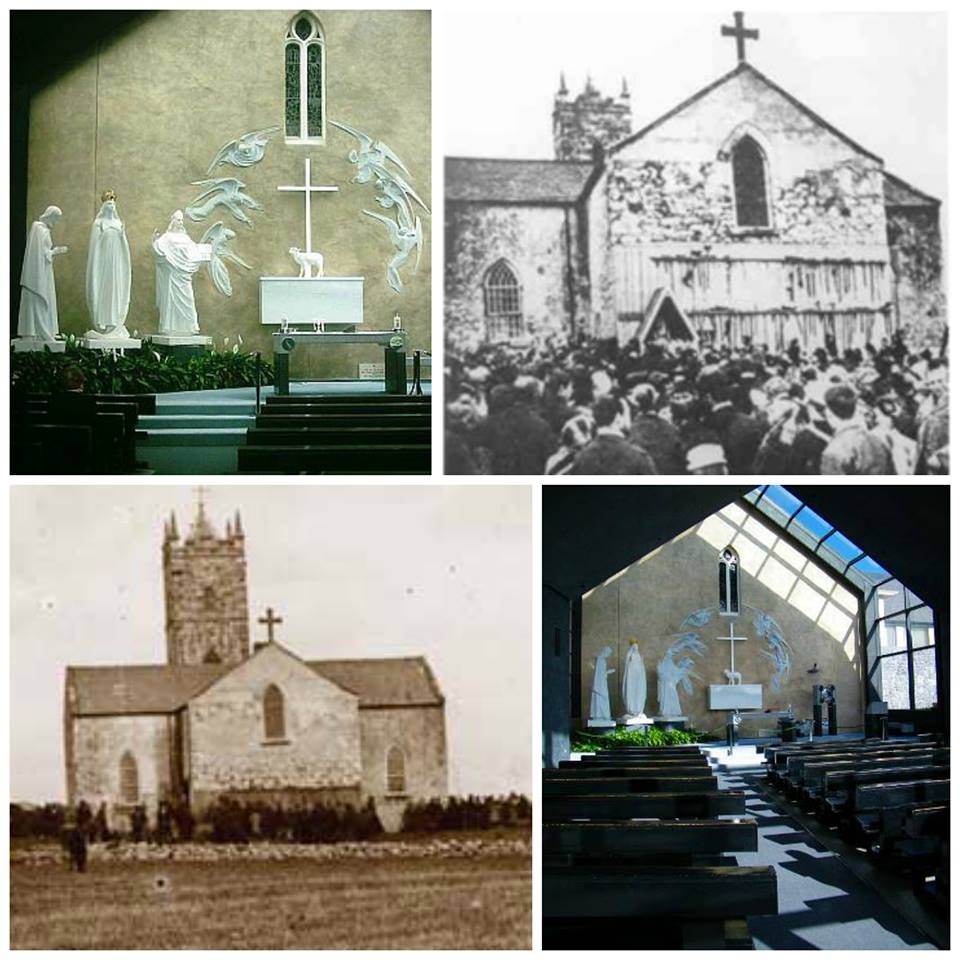 Then-and-now photos of the Marian apparition site in Knock, Ireland

There is something else about the circumstances of the apparition that is important: prior to its occurrence, Archdeacon Cavanagh, the parish priest, announced to the parishioners his plan to say 100 Masses for the Holy Souls in Purgatory whom Our Lady wished to release. The last of these 100 Masses was offered less than a week before the apparition occurred. This is considered deeply significant by many people.

Ten days after the apparition, the first miraculous cure occurred. By 1880, Fr. Cavanagh had recorded over 300 cures. His record of the cures is preserved to this day. 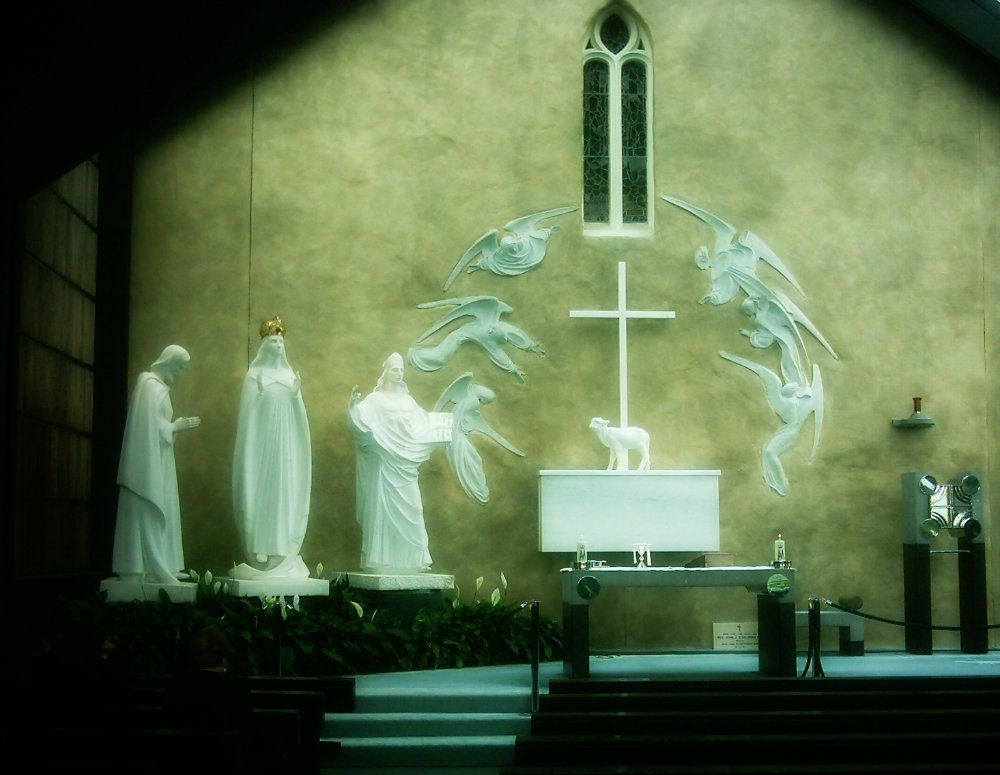 The Knock Shrine as it looks today

The Knock Shrine website exhibits historic photos, the testimonies of all fifteen eyewitnesses, and the stories of pilgrims who have visited the apparition site.

Knock has become a place of pilgrimage known for bringing healing, peace, and conversion of heart. Here is the testimony of a recent pilgrim to the Knock Shrine:

“This is my first visit to Knock. I came because my 84 year old mother wanted to come so my wife, my sister and I came with her. I was nonplussed at the idea but have been taken completely by surprise by the wondrous peace that engulfs this magical place. This visit has renewed and strengthened my faith. I leave, I hope, a better person.”

Were you already familiar with this Marian apparition?

Have you been to the Shrine of Our Lady of Knock?

Read next: Ancient Irish Litany to the Blessed Virgin Mary This article was updated in 2019. It was originally published in August of 2015. ©The Catholic Company 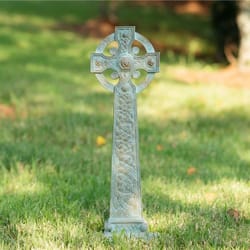 Celtic Garden Cross
Recommended for you 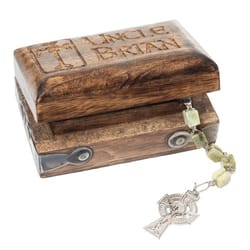 Patricia Murphy says
Mar 21 2020 4:22PM
I just heard of the apparition of Our Lady of Knock on EWTN. . I have been to Fatima. I know of the peace that you suggest. My eyes were watering and my heart was full. I will remember this feeling of being in a sacred place. I attended mass there and lit several candles. I hope to visit this location someday soon. I pray to Mary today to help protect those suffering from the Coronin Virus. I feel blessed to learn of Mary’s reaching out to those in need.

Zachary Lomo says
Feb 13 2020 12:38AM
I just heard about Our Lady of Knock for ETWN a few minutes ago and I decided to google about it and found this website. It is inspiring to read about this apparition and even if I have not been to the Shrine of Knock, I am inspired by the visit of our Blessed Mother. I am convinced beyond doubt that God exists and the Catholic Church is the Church Jesus Christ founded. That is why our Blessed Mother has visited us all over the world, in Europe (e.g,Knock, Ireland, Fatima, Portugal and Lourdes, France), Americas (Guadalupe, Mexico), Africa (Kibeho, Rwanda), Asia (Our Lady of Akita, Japan). It is my prayer that our Blessed Mother will intercede for me so that I can visit Knock in my life time.

Margaret C says
Aug 21 2019 8:31PM
I was on a tour of Ireland last summer. We stopped at the Shrine of Our Lady of Knock, but weren’t told about the stop before hand. I wish I had been prepared, but I feel so blessed to have visited this holy place.

Mary says
Nov 13 2018 9:05PM
I am very sick with 2 rare incurable diseases with one CRPS being the most painful disease that exists. Ive always felt very close to our Mother Mary and feel if I could just afford to get to Knocks Ireland I would be healed. I have total faith it would happen but after a year of begging and pleading to those with faith no one will send me. I know I will die the most painful death that exists on this planet if I dont get there. I want to be healed so badly. I'm an artist and im loosing my hands and feet from SFPN . Poly neuropathies is another i suffer from. I offer my suffering up for others but Im so scared now and just need to get to Knocks from Thiells N.Y.. If anybody reads this I ask for your prayer. They say where there is a will there is a way. Im so tired and almost bed bound. Please pray i get there in time. God Bless you all and im so happy to read in the comments about the love and peace you all felt there. Through our mothers Grace we can feel like that all the time but its very hard but oh so worth it.

Marilyn Brennan Brandel says
Jun 24 2018 2:25PM
My stepfather and I visited the Knock shrine in the pouring rain on a trip to Ireland in 1979. My mother stayed back in the hotel, very ill with a terrible cold. When we returned, after both praying for her there, she was eating in the restaurant, perfectly well, illness totally gone. AND she never got another cold!! She died in 1966 at age 88.

Emma says
Jun 4 2018 7:35PM
We joined a pilgrimage to Ireland on May 23, 2018 and it was the most wonderful travel me and my husband experienced! We went to the Our Lady of Knock and we had a Mass. We pray that we can go back to this beautiful and Holy Place again someday.

Mark Mathews says
Oct 7 2017 1:38PM
My wife and I visited the Knock Shrine the first week of September 2017. It was my favorite part of our two week visit to Ireland. Like others have said the peace I felt there was like no other I have ever experienced. I would make the trip again just to visit Knock.

Thank you for sharing this beautiful story with us! I really enjoyed reading it. I have never been to Knock and unfortunately, I probably never will, but I love reading the stories about Our Lady of Knock. I am glad you will be able to go there. I'm sure it will be a very special time for you.

Grace E Bukowski says
Aug 21 2017 6:00PM
Today August 21, 2017 is my sisters 87th birthday..She is in Heaven with our mother..My grandparents Patrick McGonagle and Grace McGonagle(her birth name) were both born in Ireland..but didnt meet until both were in Malden Massachusetts, They married and had had 5 children. I am planning a trip to Ireland next spring and I want to visit Our Lady of Knock. When my mother passed in 1998 I had the organist play Our Lady of Knock as one of her songs...my cousin, who attended the service handed me a medal of Our Lady of Knock while the song was playing....All this is so meaningful to me..I must visit this HOLY PLACE! Thank you for letting me share this wonderful story! Grace Bukowski Newton NH