A Patron Saint For Alcoholism

Venerable Matt Talbot, whose feast day is June 19*, is considered the patron of men and women struggling with alcoholism.

Born in Dublin, Ireland, Matt was one of thirteen children. His father, who worked on the docks, was an alcoholic. Matt was thirteen years old and had received only a few years of schooling when he obtained work as a messenger for some liquor merchants. It was there that he began to drink excessively. For fifteen years—until he was almost thirty years old—Matt was an active alcoholic.

Although he was known to work hard on the job, he also "drank hard" and often returned home late after being out with friends after work. He would sometimes borrow money to keep up his daily habit of drinking, even stealing money once from a friend. In speaking about his early life, Matt once said that he would occasionally think about the Mother of God, and every once in a while even pray the rosary. Perhaps these prayers to the Blessed Mother had something to do with his recovery from alcoholism.

Here is the story from author Bert Ghezzi:

"His father beat him, made him change jobs—but nothing could stop Matt’s habit. After work he and his buddies went straight to the pub. Matt spent every penny on drink and once pawned his boots for a pint. Remarkably, his drinking did not prevent his putting in a good day’s work. And he said that when he was intoxicated he occasionally thought about the Blessed Mother and prayed an off-handed Hail Mary. Matt speculated later that she may have had something to do with his conversion.

One day in 1884 everything suddenly changed. Matt had been out of work several days and expected his buddies to take him drinking. When they snubbed him, he made a decision that transformed his life irrevocably. Mary Andrews, his sister, reported what happened when Matt came home that day:

'My mother said, "You’re home early, Matt, and you’re sober!" He replied, "Yes, mother, I am." After dinner he remained in the house which was not usual, and finally he remarked to my mother. "I’m going to take the pledge." She smiled and said, "Go, in God’s name, but don’t take it unless you are going to keep it." He said, "I’ll go, in God’s name."

As he was going out mother said, "God give you strength to keep it." He went to Clonliffe, made his confession, and took the pledge for three months. He had been a couple of years away from the sacraments then. Next morning—Sunday—he went to Holy Communion. On Monday he went to 5 a.m. Mass in Gardiner Street and was at his work as usual at 6 a.m. This he made a regular practice from that time on.

But after his work, to keep away from his companions, he used to walk to a distant church, either St. Joseph’s, Berkeley Road, or St. Peter’s, Phibsboro, and remain there until bedtime.

Once or twice—possibly on a Saturday—he went with the men to the public house, but he drank only minerals, and he usually spent Saturday afternoons away from where he might meet his old companions, and generally in a church. He had a bad time of it at first and sometimes said to my mother, that, when the three months were up, he would drink again.'

But Matt extended the three months into forty-one years. His new behavior flabbergasted everyone. Matt supported his sobriety with traditional Catholic disciplines such as prayer, frequent communion, weekly confession, spiritual reading, fasting, and service. He also seems to have taken guidance from a wise spiritual director, but the person’s name is not known. In 1891, Matt found community support by joining the Franciscan Third Order. He lived the rest of his life quietly, working and praying and encouraging others to quit drinking. Matt Talbot died walking to Mass on Sunday, June 7, 1925." Alcoholism affects many families today—not only the person suffering from the disease, but also the ones who love and care for them.  The following is a prayer to Venerable Matt Talbot for those who suffer from alcohol addiction, and a prayer for his canonization:

PRAYER FOR THE ADDICTED

God of mercy, we bless You in the name of Your Son, Jesus the Christ, Who
ministered to all who come to Him. Give Your strength to those bound by
the chains of addiction. Enfold them in Your love and restore them to the
freedom of God’s children. Lord, look with compassion on all those who
have lost their health and freedom. Restore to them the assurance of Your
unfailing mercy, and strengthen them in the work of recovery. To those
who care for them, grant patient understanding and a love that perseveres.
We ask this through Christ our Lord. Amen

PRAYER FOR THE CANONIZATION OF VENERABLE MATT TALBOT

Lord, in your servant, Matt Talbot
you have given us a wonderful example
of triumph over addiction, of devotion to duty,
and of lifelong reverence for the Most Holy Sacrament.
May his life of prayer and penance
give us courage to take up our crosses
and follow in the footsteps
of Our Lord and Saviour, Jesus Christ.

Father, if it be your will that your beloved servant
should be glorified by your Church,
make known by your heavenly favours
the power he enjoys in your sight.
We ask this through the same
Jesus Christ Our Lord.
Amen.

For more information: Books by Bert Ghezzi and others about overcoming personal problems.

*Some parishes and areas choose to commemorate Ven. Matt Talbot on June 18th, or June 7th, the anniversary of his death. Praying For Those with Addictions: A Mission of Love, Mercy, and Hope
Recommended for you 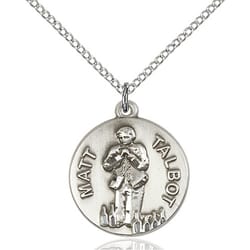