Since ancient times humans have been fascinated with angels and how they work. Much of what we know about angels outside of Sacred Scripture is taken from the Church Fathers and Doctors, as well as from the lives of the saints and the experience of exorcists.  Listed below are 25 interesting facts you may not know about God's powerful heavenly ministers!

1. The angels are entirely spiritual beings; they do not have material bodies, they are neither male or female.

2. Angels have an intellect and a will, just like humans.

3. God created the complete hierarchy of angels altogether in one instant.

4. The angels are ordered into nine "choirs" and are ranked according to their natural intelligence, far above human intelligence.

5. The highest angel in rank of natural intelligence is Lucifer (Satan).

6. Each individual angel has its own unique essence and is therefore a distinct species, as different from one another as trees, cows, and bees.

7. Angels have personalities that differ from one another, similar to humans.

8. Angels are infused with a perfect knowledge of all created things, including human nature.

9. Angels do not know particular events to occur in history, unless God wills that knowledge for a particular angel.

10. Angels do not know what graces God will give to certain humans; they can only infer it by observing the effects.

11. Each angel was created for a specific task or mission, of which they received instantaneous knowledge at the moment of their creation.

12. At the moment of their creation angels freely chose whether to accept or reject their mission, a choice forever locked into their will without remorse.

13. Each human being from the moment of their conception has a Guardian Angel assigned to them by God to lead them to salvation.

14. Human beings do not become angels when they die; rather, the saints in heaven will take the positions of the fallen angels who forfeited their place in heaven.

15. Angels communicate with one another by passing concepts mind to mind; the higher intelligence angels can empower the intellect of the lower ones to grasp the concept being communicated.

16. Angels experience intense movements in their will, different from but similar to human emotions.

17. Angels are far more active in the life of humans than we realize.

18. God determines when and how angels can communicate with humans.

19. Good angels help us to act in accord with our created nature as rational human beings, fallen angels the opposite.

20. Angels don't move from location to location; they instantaneously act where they apply their intellect and will, which is why they're depicted with wings.

21. Angels can prompt and guide the thoughts of humans, but cannot violate our free will.

22. Angels can take information from your memory and bring an image into your mind in order to influence you.

23. Good angels bring to mind imagery that helps us do the right thing according to God's will; the fallen angels the opposite.

24. The degree and kind of temptation from fallen angels is determined by God according to what is necessary for our salvation.

25. Angels don't know what is happening in your intellect and will, but they can surmise it by watching our reactions, behavior, etc.

Scripture tells us that we are surrounded by a great cloud of witnesses (Heb. 12:1) and suggests that we may be unaware of how angels are interacting with us at times (Heb. 13:2). Knowing these few facts about the angels and how they work can help us be more aware of their influence over our lives.

We should pray to be able to recognize more clearly the promptings we receive from our Guardian Angels, so that we will choose the good with confidence and avoid that which is bad for us.

Read next The Holy Archangels: Their Identity & Mission 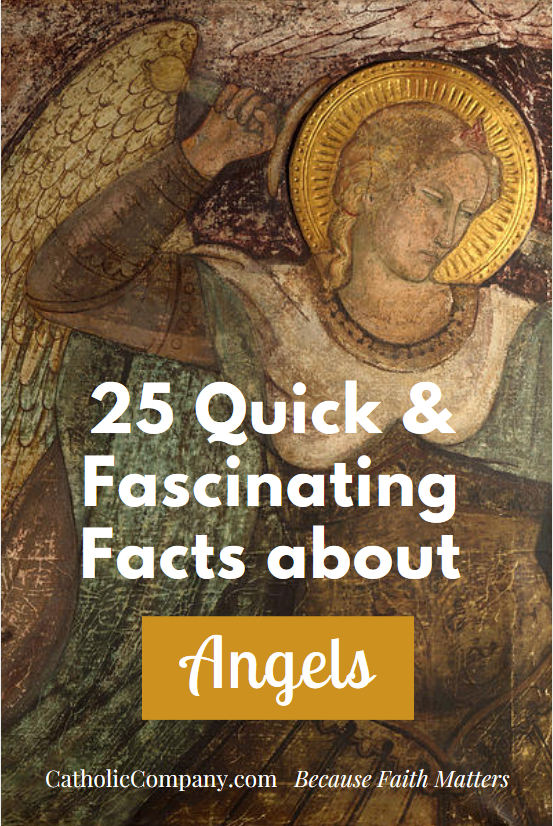 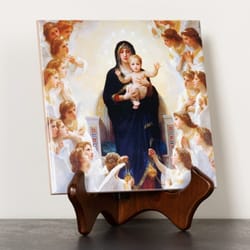 Queen of Angels Ceramic Tile
Recommended for you

His Angels at Our Side & Angels and Saints (2 Book Set)

Nanette Hazelton says
Oct 5 2019 10:17AM
I was sitting in my kitchen chair one day. My husband and foster son both said:"Did you see that?" Staring at me. They said a bright light was above my head and then it disappeared through the wall behind me. Is this possible?

Ashley Osmera says
Oct 7 2019 1:48PM
In response to moments like this, only God truly knows! Whatever the ultimate source, if you take advantage of the memory of that moment to ask for your guardian angel's intercession, then good will have come from it!

Hazel says
Oct 3 2018 1:23PM
Thank you so much. Reading the comments and your answers Gretchen was as informative as the original article!

haileyesus says
Apr 8 2018 10:26AM
great idea but why Angels don't move from one place to another?

Gretchen Filz says
Apr 13 2018 4:27PM
Hello Hailey, angels do not have bodies, so they do not physically move from place to place. Angels are pure intellects, and they "move" from place to place just by thinking about it. They are in the place where they direct their intellects. They move as fast as they think. This is why angels are depicted with wings.

Bernie Paiano says
Oct 2 2017 3:47AM
Thanks Gretchen, Very informative and insightful!! Love reading about Angels! Passed it on to a friend who wanted to know more!!

For #12. If the angel rejects its God given mission, is it instantly cast out of heaven or can it choose another mission according to its natural intelligence?

And #14. I guess I'm confused by the wording. I knew about the first part but I don't get the last of it. Could you dumb it down for me, please?

LOVED reading all this. Thank you!

Gretchen Filz says
Oct 2 2017 12:25PM
Hi Lorraine, God created each angel for a specific purpose. Those angels who rejected God's will for them are the fallen angels. Likewise, if we reject God's will for us and die without repentance, we will also spend eternity in hell with the fallen angels. As for #14, everyone has a special place in the hierarchy of heaven (the angels themselves fall into ranks according to their created purpose), and although it is not part of Catholic dogma, Church tradition holds that the saints in heaven take the place in the hierarchy of those angels who fell.

Betty M says
Oct 1 2017 9:36PM
Question: if angels cannot read our minds; when we communicate with them in prayer, must it be said out loud?

Gretchen Filz says
Oct 2 2017 12:38PM
Hi Betty, if we are directing communication to our angel they can understand us. It is the same as when two humans are speaking to one another; they cannot read one another's minds, but they can understand a common language in conversation, such as, "Hi Johnny, will you please help me to ...." It is the same when we call to our angel (even non-verbally), "Guardian Angel, will you please help me to...". Angels can "hear" us when we call to them in conversation, but they cannot read our minds if our thoughts are not being directed towards them as communication. Angels are not omniscient or omnipresent like God, who knows every thought and movement of our souls; rather, angels are spirits with an intellect that can communicate with us mind to mind. Think more along the lines of telepathic communication rather than mind-reading. One is consensual, the other is not.

Gretchen Filz says
Oct 2 2017 11:30AM
Hi Robert, we know these things about angels from Sacred Scripture, the Church Fathers, the saints and Church Doctors (especially St. Thomas Aquinas who unpacked the metaphysics of angels), and from the practical experience of exorcists.

Annette says
Sep 27 2017 8:50PM
So one can have a bad angel with them... I don't understand. This frightens me. For the sake of my loved ones, what if they don't have a good Angel by them. I never learned about angels, and as a convert to Catholicism I'm still learning.

Gretchen Filz says
Sep 29 2017 9:51AM
Hi Annette, the Church teaches that we all have a Guardian Angel assigned to protect us and lead us on the path to heaven. Yet, demons are also present, and they can tempt us and lead us away from God. This is part of our daily spiritual warfare - staying close to God, his Church, and his sacraments. We must earnestly pray for those who are outside the Church, but not in fear or worry - God loves them more than we do!

And, May Our Lord continue to bless You in your Vocation. Amen!!!

Please, if you can help me to better understand a few of the statements, I would greatly appreciate it.

#12- At the moment of their creation Angels freely chose whether to accept or reject their mission, a choice forever locked into their will without remorse.

Q: Does the falling of lucifer.. contradict?

In the statment #12 : forever locked into their will...

#25- Angels don't know what is happening in your intellect and will, but they can surmise by watching our reactions, behavior, Etc.

Q: Does # 25 Angels don't know what is happening in your/our intellect ...

contradict? # 21: ...can prompt and guide the thoughts

I Thank You for Your help. "PAX TECUM!"

Gretchen Filz says
Sep 27 2017 5:17PM
Hi Sherrill! Thank you, I love being Catholic! As for your questions - they are good ones. Lucifer rejected his God-given mission, and as a result was forever locked in that choice of rebellion in the instant that it was made, and he was then cast out of heaven. As far as the other question, angels cannot read our minds - as in they do not know for certain what we are thinking about in the present moment. But they do have access to our past, our memories (for example, past sins we have committed, evil things we have seen, etc.). They can bring these impressions and others into our minds in order to guide our thoughts in a particular direction, but this is caused by them and comes from outside of us, not within us. They can only know that their attempts to influence our thoughts is working based on how we react (do we show signs of anxiety, anger, etc.). I hope that helps answer your question!